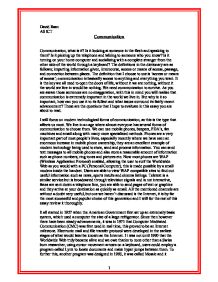 Communication, what is it?

David Raan AS ICT Communication Communication, what is it? Is it looking at someone in the flesh and speaking to them? Is it picking up the telephone and talking to someone who you know? Is it turning on your home computer and socialising with a complete stranger from the other side of the world through a keyboard? The definitions in the dictionary are as follows; imparting information given, intercourse, access or means of access, passage, and connection between places. The definition that I choose to use is 'access or means of access'; communication is basically access to anything and everything you want. It is the key we all need to open the doors of life, without it we are nothing, without it the world we live in would be nothing. We need communication to survive. As you are aware those sentences are no exaggeration, with this in mind you will realise that communication is extremely important in the world we live in. ...read more.

It all started in 1957 when the American Government first set up an extremely basic system, which used a computer the size of a large refrigerator. Since then however there have been steady advancements, it was in 1971 that Computer Meditated Communication (CMC) was first used in real time, this proved to be an Internet milestone. Electronic mail and file transfer protocol were developed in the earliest stages of what would later be known as the Internet. I t was not until 1990 that the Worldwide Web truly became alive and we owe thanks to none other than a Swiss born researcher, using cursor movement arrows on a keyboard, users could employ a program called Lynx to locate documents and make hyper jumps between them. To further this, another program was designed in 1993, it was called Mosaic and it provided a graphical interface for the World Wide Web, the designers would later create Netscape communications which proved to be a major competitor in the internet software market. ...read more.

It is now quite possible to play complex computer games with several others through your Internet connection, games far more advanced than Roy Trubshaws Multiple User Dungeon (A game which was revolutionary decades ago). Users of the Internet have access to downloadable music, software and films, this is not to the delight of the respective industries however. Users are able to download anything for no charge, it is mostly illegal but that does not deter many, the result is music, film and software companies having a large portion of their profits slashed. Video conferencing is a vital form of communication for many businesses, it allows face to face meetings to take place without the participants being in the same room. For this you would need highly efficient computers, sound cards, cameras, compression cards, specialist software and modem connection, unless all these components are present it is extremely difficult to transmit such large amounts of data. Another mentioned feature of the Internet, credit card payment, is also occasionally troublesome; credit card fraud has rocketed since the introduction of online shopping, funds from a users bank account can quite easily be extracted once card details have been given. 1 ...read more.