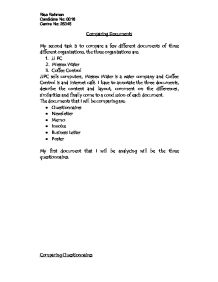 Comparing Documents My second task is to compare a few different documents of three different organisations, the three organisations are: 1. JJ PC 2. Wessex Water 3. Coffee Control JJPC sells computers, Wessex Water is a water company and Coffee Control is and internet caf�. I have to annotate the three documents, describe the content and layout, comment on the differences, similarities and finally come to a conclusion of each document. The documents that I will be comparing are: * Questionnaires * Newsletter * Memo * Invoice * Business Letter * Poster My first document that I will be analyzing will be the three questionnaires. Comparing Questionnaires A questionnaire is a form containing a set of questions. JJPC's logo has been placed in the top right hand corner and it is orange, their logo is just simple and bulky, in my opinion I think that this is great because the audience will be able to see it as it should be seen. Coffee control have two logos one on each side but it is very small, their logo has a picture of a mug in it, which is black and gives the customer an idea of what the questionnaire is about. The colour of coffee controls logo is turquoise and white. Wessex water has only one logo which is in the middle and at the top of the page it is in blue but it isn't that clear because it is uncertain. Personally, I think JJPC's logo is the most excellent because it is clear and understandable and I like the idea of blending in the background. JJPC and Wessex water don't have a header; nevertheless coffee control has got a header, their header is "Coffee Control" which is their company name. I would have suggested Wessex water to have a header because their logo is not clear. Coffee control has a header since it is part of their house style. ...read more.

All three Organisations have two columns. JJPC has 1 subtitle, "New Technical Manager Appointed"; it is the second topic in the document. Their text is not accurate because they have made a spelling mistake; they have written "Manger" when it should be "manager". Their subheading is centre aligned and it is the same font as the rest of the document except slightly bigger. Coffee Control has 5 subtitles, "Coffee Control switches to Fair trade", "Fresh, Special, Organic, Caf� direct", "Coffees explained by the Lord of the latte!", "Coffee Facts," and "New fax back service launched" their subheadings are similar to JJPC's but is not underlined and it is the same font as their text but it is bigger, two of the subtitles are in one column and the other three in the 2nd column. Wessex Water has three subtitles, two on the 1st column and 1 on the 2nd column; they are in capital letters and the same font as the rest of the document and it is bold, (for the 1st two Subtitles) but the 3rd subtitle is the same as the rest of the document, whereas it is bold. The subtitles are: "Visit Wessex Water's Award Winning Operations Centre", "Fountain Project Surges on Thanks To Award" and "Beware Bogus Callers". JJPC's text is informal, all newsletters should be informal. Personally, I think that Wessex Water and Coffee Control's test are rather formal. JJPC's and Wessex Water's newsletters have a small number of mistakes. E.g. JJPC has spelled manager as "Manger" also they have missed out spaces. Wessex Water has missing words and inappropriate spaces. Yet, Coffee Controls newsletter is very accurate with no mistakes which I know of. The audience for JJPC's newsletters would be teenagers and young adults, to encourage their parents to buy a new computer. However, Coffee Control's audience would be adults because they have included more information and is set out more to the formal side. ...read more.

Wessex Water has contained a variety of things such as, the date of the play, the time the coach is going to leave, the price for the tickets. Wessex Water have made a mistake on the word "Performance", they have spelled it wrong, this makes the company look low and not high standard and in addition they have tried to cover up the mistake, by putting a line on it. Below their prices for their performances is a small finishing, "Bring the family!" JJPC have not included much information, personally I think they have not advertised much, all they have included is their title, image, logo, and a short sentence at the end saying "JJPC - for all your PC needs!" Coffee Controls poster is similar to JJPC's as they have not included a large amount of information. Under their image is a short sentence like JJPC's, Coffee Controls sentence at the bottom is, "Delicious with a new York Deli Sandwich". Coffee Control has included a header it is part of their house style, whereas they have increased the size and made it look bold, their header is their company name. Wessex Water and JJPC's document does not contain a header. Wessex Water and Coffee control presents footer, each containing contact details. Wessex Water's footer consists of their companies address, telephone number and fax number. While Coffee Control's footer includes their company address, telephone number, fax number and their email address, which enables the customers to receive further information, JJPC had not included footer at all. Overall, after analyzing all three posters, presented by the three organisations, according to my opinion, I suggest Wessex Water's poster is mostly in my as this poster, as I have already mentioned presents bold and clear features, meaning, at a first one would become interested and would actually approve of the poster. As well as presentation the Wessex Water's company also includes other features, as mentioned earlier in my comparison which would attract attention, and the document would actually serve its purpose. ?? ?? ?? ?? Risa Rahman Candidate No: 0016 Centre No: 28345 ...read more.