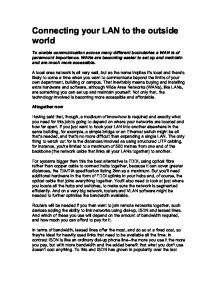 Connecting your LAN to the outside world.

Connecting your LAN to the outside world To enable communication across many different boundaries a WAN is of paramount importance. WANs are becoming easier to set up and maintain and are much more accessible. A local area network is all very well, but as the name implies it's local and there's likely to come a time when you want to communicate beyond the limits of your own department, building or campus. That inevitably means buying and installing extra hardware and software, although Wide Area Networks (WANs), like LANs, are something you can set up and maintain yourself. Not only that, the technology involved is becoming more accessible and affordable. Altogether now Having said that, though, a modicum of know-how is required and exactly what you need for this job is going to depend on where your networks are located and how far apart. If you just want to hook your LAN into another elsewhere in the same building, for example, a simple bridge or an Ethernet switch might be all that's needed, and that's no more difficult than expanding a single LAN. The only thing to watch out for is the distances involved as using structured UTP cabling, for instance, you're limited to a maximum of 500 metres from one end of the backbone (the network cable that links all your LANs together) to another. For systems bigger than this the best alternative is FDDI, using optical fibre rather than copper cable to connect hubs together, because it can cover greater distances, the EIA/TIA specification listing 2km as a maximum. ...read more.

which networks different users on a private WAN are allowed to access--and almost certainly when they can surf the Internet and what kind of sites they can browse. There are a number of ways of meeting all these needs, starting with the simple filtering options to be found in the hardware used to join LANs together. Using such facilities in a router or switch it's possible, for instance, to stop particular workstations or even whole LANs from communicating across a WAN link, barring access to other networks and the Internet altogether, if required. As simple and effective as these filtering options are, however, they're something of a sledgehammer when what most people want is a much more flexible, and much easier to manage, mechanism for controlling access to their LAN. The best way of going about this is to add a firewall, which usually involves extra hardware or software, or sometimes both, capable of monitoring traffic as it passes in and out of your network. Again most of these will let you set up filters to limit the users, workstations, and networks allowed to communicate across the firewall barrier in both directions. But that's not all they provide--rather, the more sophisticated will offer additional proxy services, where the firewall accesses the local network in response to outside requests, and the Internet in response to local calls. These so-called 'application-level gateways' or 'proxy servers' will have substitutes for all the more common services, such as Telnet and FTP, and if someone tries to access your LAN or the Internet using a non-proxied service they won't be allowed through. ...read more.

The same NMS will often be used to analyse RMON statistics as monitor SNMP traps, and most packages are now capable of interrogating RMON probes. The statistics these probes can collect vary, depending on which RMON groups have been implemented. One probe is needed for each network segment you want to analyse, and some devices might only have one built-in probe. On a switched network, you should analyse each segment for utilisation; if one segment is more heavily used than the others, then consider moving some of the machines from that segment to another. RMON can also be used to spot other sources of problems. For example, Windows 95 loads NetBEUI by default when a network adapter is added. NetBEUI is suited to peer-to-peer networks, and you're unlikely to use it on an enterprise network. By tallying the MAC address of any machines transmitting NetBEUI broadcasts with your records, you can trace the offending machines and remove the protocol. However, you'd also be able to tell how much of the overall network traffic is NetBEUI, and whether it's responsible for slow responses. Like any line of business, it's important to act on the information you receive in order to get the full benefit. Self-configuring networks might be on the horizon, but they haven't arrived yet. Most networks need management--only the smallest can get away without it. Careful management will ensure that your investment in network infrastructure isn't lost. View the time spent in managing the network as you would the time spent checking the oil on your car: it could save a very large problem later on. ...read more.