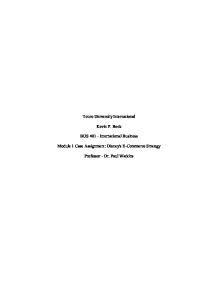 Touro University International Kevin P. Beck BUS 401 - International Business Module 1 Case Assignment: Disney's E-Commerce Strategy Professor - Dr. Paul Watkins If the Walt Disney Company expects to achieve success as it pursues international markets, effectively integrating the Internet and e-commerce into its global strategy must become one of its prime considerations. In an article published on the website Forbes.com, Disney CEO Michael Eisner indeed states: "The Internet continues to be a central focus of our company's business strategy".1 This paper will address three key points: why Disney must expand its use of e-commerce to gain leverage in the global market, how it can be done, and what the potential benefits are. Let's begin by discussing why Disney should place increased emphasis on e-commerce. If it expects to remain competitive and attract new business, Disney should strive to raise its position in the e-commerce arena. ...read more.

It's clear Disney needs to enhance its e-commerce and Internet position. But how should the company go about it? Disney is moving in the right direction towards expanding its e-commerce capacity. For example, in 2001 Disney purchased the Fox Family Worldwide cable network, which had more than 105 million subscribers in the U.S., Europe, and Latin America.3 And as recently as June 2002, the company struck a deal to provide "select online content on a non-exclusive basis to AT&T Corporation for re-distribution via the AT&T Worldnet Service homepage".4 The arrangement may yield dividends, but I believe Disney truly needs to establish a mutually beneficial partnership with a major Internet provider similar to what emerged when Time-Warner joined forces with AOL. Such a merger would place Disney products directly in the path of new and existing Internet Users. ...read more.

The bottom line is that Disney must transform itself into more of a "clicks-and-mortar" business to survive in a global environment. And while the company appears to finally be on the right track, it must keep in mind why it needs to revitalize its internet-based operations and employ proven strategies along the way. Hopefully, once developed, the benefits of an effective e-commerce strategy will motivate company leadership to take the Wonderful World of Disney to new heights as a global enterprise. 1 Dick Ackman; Forbes.com; For Disney, Go, Going, Gone; found at http://www.forbes.com/2001/01/30/0130topnews.html on December 26, 2002. 2 Michael Pastore; Internet.com; Internet Playing Filed Tilts Further Toward Big Names; found at http://cyberatlas.internet.com/big_picture/traffic_patterns/article/0,,5931_777851,00.html on December 28, 2002. 3 BBC News.com; Disney Buys Murdoch Cable Network; found at http://news.bbc.co.uk on December 27, 2002. 4 ATT.com; Walt Disney Internet Group Content To Be Distributed on AT&T Worldnet Service Home Page; found at http://www.att.com/news/item/0,1847,10826,00.html on December 29, 2002. 5 IETP.com; Internet Concepts; found at http://www.itep.co.ae/itportal/english/Content/EducationalCenter/InternetConcepts/e_commerce.asp on December 30, 2002. ...read more.

In summary, the report is of high quality, as the report states how Disney's eCommerce presence is lacking and gives possible improvements. There's a few little points which could make the report better, but there are quite small, and I ...

In summary, the report is of high quality, as the report states how Disney's eCommerce presence is lacking and gives possible improvements. There's a few little points which could make the report better, but there are quite small, and I believe that even without the small improvements the report would be awarded high marks. The student understands the importance of the Internet, and how business should embrace the use of the internet. In addition, the student states how the website currently is loosing market share due to their competitors which have adapted more quickly. Further down the report, this mentions how the purchasing of another company, could allow their eCommerce site increasing it's on-line present.

The report describes how eCommerce reduces overheads, although I feel that this isn't balanced. The report only mentions the benefits in terms of finance of eCommerce. The report should include something on the lines of 'With the cost benefits, there are some costs which are going to increase on a short-term basis. As the company will need to employ additional staff members, as the current work force has a lack of skills'.