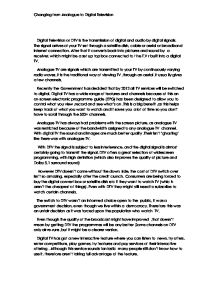 For and against: Change from analogue to digital TV

Digital Television or DTV is the transmission of digital and audio by digital signals. The signal arrives at your TV set through a satellite dish, cable or aerial or broadband internet connection. After that it converts back into pictures and sound by a receiver, which might be a set up top box connected to the T.V r built into a digital TV. Analogue TV are signals which are transmitted to your TV by continuously varying radio waves, it is the traditional way of viewing TV ,through an aerial .It usually gives a few channels. Recently the Government has decided that by 2012 all TV services will be switched to digital. Digital TV has a wide range of features and channels because of this an on-screen electronic programme guide (EPG) ...read more.

However DTV doesn't come without the down side, the cost of DTV switch over isn't so amazing, especially after the credit crunch. Consumers are being forced to buy the digital convert box or satellite dish etc if they want to watch TV (which aren't the cheapest of things). Even with DTV they might still need to subscribe to watch certain channels. The switch to DTV wasn't an informed choice open to the public, it was a government decision, even though we live within a democracy. Therefore this was an unfair decision as it was forced upon the population who watch TV. Even though the quality of the broadcast might have improved ,that doesn't mean by getting DTV the programmes will be any better .Some channels on DTV only air re-runs ,but it might be a clearer version. ...read more.

Overall many people may think that digital TV should be compulsory to all homes with a TV, as it offers more choice and more information 'there's something for everyone' in the same sense theirs a 'channel for everyone'. Digital TV will open doors to more advanced technology for television, like Broadband on the interactive button, or live call in on programmes through the interactive call, this could be done as there would be free frequencies. With the recent increase of 3D films why not 3D TV, one step better than HDTV. The switch to digital will be like the switch of black and white to colour everyone will eventually have it, soon it will be a normal thing and it will be the doorway to the next step towards the evolution of broadcasting. ?? ?? ?? ?? Changing from Analogue to Digital Television ...read more.