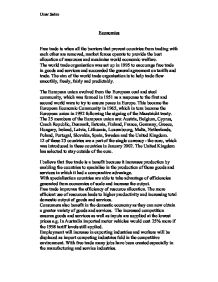 Free trade is when all the barriers that prevent countries from trading with each other are removed, market forces operate to provide the best allocation of resources and maximise world economic welfare.

12 of these 25 countries are a part of the single currency- the euro, which was introduced in these countries in January 2002. The United Kingdom has selected to stay outside of the euro.

I believe that free trade is a benefit because it increases production by enabling the countries to specialise in the production of those goods and services in which it had a comparative advantage.

With specialisation countries are able to take advantage of efficiencies generated from economies of scale and increase the output.

Free trade improves the efficiency of resource allocation. The more efficient use of resources leads to higher productivity and increasing total domestic output of goods and services.

Consumers also benefit in the domestic economy as they can now obtain a greater variety of goods and services.The increased competition ensures goods and services as well as inputs are supplied at the lowest prices e.g. In Australia imported motor vehicles would cost 25% more if the 1998 tariff levels still applied.

Employment will increase in exporting industries and workers will be displaced as import competing industries fold in the competitive environment. With free trade many jobs have been created especially in the manufacturing and service industries.

The countries that are involved in free trade experience the rising in living standards, increased incomes and higher rates of economic growth.

The living standards increase as the country is being allowed to specialise in the production of those goods and services in which it had a comparative advantage which means that the country will have more income and more profit.

If the countries keep importing then there will be more jobs available for the people in developing countries.

Some people may disagree with free trade because it does have some disadvantages.

Free trade will increase domestic economic instability from international trade cycles, as economies become dependent on global markets. The Asian economic crisis in 1998 and economic slowdown in the global economy in 2001 illustrate this situation.

International markets are not a levelplayingfield as countries with surpluses may dump them on the world markets below cost. Some efficient industries may find it difficult to compete for long periods under such conditions.

Developing or new industries may find it difficult to become established in a competitive environment with no short-term protection polices by governments.

Free trade can also lead to pollution and environmental problems as companies fail to include these costs in the price of goods. This is because countries may import dangerous products which may cause harm.

Free trade will increase the unemployment rate in the countries home economy, as the industries would close down because the country is importing the goods that those industries specialised in.

Free trade will also exploit labour in developing economies as if the countries keep importing then they will keep on using cheap labour to their advantage.

My conclusion is that free trade is a benefit because those countries that lower trade barriers and open their markets enjoy higher economic standards of living. Consumers have access to a wider range of higher quality products at prices lower than they would otherwise pay. The average person also benefits in terms of wages and job opportunities. When labour and capital flow freely to the most productive areas of the economy, workers are employed in better, higher quality jobs with higher wages.

Free trade also enables people to sell their products to those who are willing to pay the highest price for them. That means the original producer is able to capture a larger proportion of the value of the product. In this sense free trade is fair trade.

I also believe that free trade is wrongly blamed for many problems such as it is bad for the environment.  Free trade enables production to occur in places where it is most environmentally appropriate e.g. most aluminium is produced in places where there is hydroelectric power used, which is less resource intensive than gas or coal.