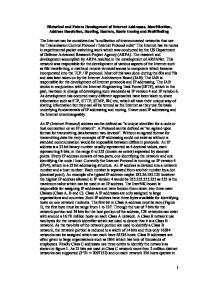 Historical and Future Development of Internet Addresses. Identification, Address Resolution, Routing, Routers, Route tracing and Faultfinding The Internet can be considered as "a collection of interconnected networks that use the Transmission Control Protocol / Internet Protocol suite" The Internet has its routes in experimental packet switching work which was conducted by the US Department of Defence Advanced Research Project Agency (ARPA). The research and development accomplish by ARPA resulted in the development of ARPANet. This network was responsible for the development of various aspects of the Internet such as file transferring, e-mail and remote terminal access to computers which became incorporated into the TCP / IP protocol. Most of this was done during the 60s and 70s and was later taken on by the Internet Architecture Board (IAB). The IAB is responsible for the development of Internet protocols and IP addressing. The IAB works in conjunction with the Internet Engineering Task Force (IETF), which in the past, has been in charge of developing such standards as IP version 4 and IP version 6. As development has occurred many different approaches have been taken to share information such as FTP, HTTP, STMP, IRC etc, which all have their unique way of sharing information but they can all be termed as the Internet as they use the basic underlying fundamentals of IP addressing and routing. I have used IP addressing and the Internet interchangeably. An IP (Internet Protocol) address can be defined as "a unique identifier for a node or host connection on an IP network". A Protocol can be defined as "an agreed-upon format for transmitting data between two devices". Without an agreed format for transmitting data the very concepts of IP addressing could not exist as without a standard communication would be impossible between different protocols. An IP address is a 32 bit binary number usually represented as 4 decimal values, each representing 8 bits, in the range 0 to 255 (known as octets) ...read more.

Domain Name System (or Service) can be defined as "an Internet service that translates domain names into IP addresses". Domain names are alphabetic which makes them easier to remember. However the Internet is based on IP addresses. Every time you use a domain name, therefore, a DNS service must translate the name into the corresponding IP address. For example, the domain name www.wmin.ac.uk might translate into an IP address such as 213.83.195.65. A Domain Name Server performs the translation of English words into to 32 bit IP addresses. The DNS system can be viewed as its own network. If one DNS server doesn't know how to translate a particular domain name, it asks another one, and so on, until the correct IP address match has been found. Each network normally has its own its own Domain Name Server, and when communication is established between the such servers on a TCP/IP networks connected to the Internet are referred to as a Domain Name Service (DNS). There are six top level domain names which are .com, .edu, .gov, .mil, .net, and .org. However DNS can be used for other IP address unrelated to the HTTP protocol such as ftp, mail servers (SMTP / POP3), news (for UseNet servers) etc. It is of up most importance to understand how networks communicate with each other to be able to understand how routing is carried out on the Internet. Routing can be defined as "the internetworking and processes of moving a packet of data from its source to its destination". Routing is usually performed by a dedicated device called a router. It is a key feature of the Internet because it enables data to pass from one computer to another and eventually reaching the target machine (destination). The Internet could not exist without routing as in theory if different networks could not send and receive data they could not operate as an Internet which is basically many smaller networks connected to form one massive grid. ...read more.

However changes have been made to the IPv4 header in IP6 which will increase the speed in which routers can process the data. This is effect will make processing more efficient as it will cut down on the routers CPU cycles and thus enabling a higher packet per second (PPS) processing rate to be obtained. The major problem with IPv6 is that it will take many years for it to be successfully implemented as it requires hardware and Internet standards to be updated. The Internet Engineering Task Force is responsible for developing the next generation of the Internet Protocol such as IPv6. It is important to remember that both IPv4 and IPv6 both need to be standards in order for the all the networks on the Internet to work as one and freely exchange data packets. The future of IP addressing remains to be seen as new technology is being developed at an alarming rate. A totally new break through in transmitting data maybe be discovered but as yet it would be far to assume IP version 6 as the immediate future for IP addressing. Many factors have to be taken into account but one thing that remains clear is that the Internet is forever growing and changing and this will produce various growing pains which must be anticipated and swift concise measures must be taken to ensure the functionality of the Internet as a whole. Figure 1: Class A Octet 1 Octet 2 Octet 3 Octet 4 Class B Octet 1 Octet 2 Octet 3 Octet 4 Class C Octet 1 Octet 2 Octet 3 Octet 4 Figure 2: The TCP / IP Protocol Architecture. Figure 3: TCP Protocol Header Figure 3: TCP Header Format 2 Source Port 2 Destination Port 4 Sequence Number 4 Acknowledgment Number 2 Data Offset / Control Flags 2 Window 2 Checksum 2 Urgent Power Data Figure 4: IP Header Format Version Headers Length Type Of Service Total Length Identification Fragment Offset Time to Live Protocol Checksum Source Address Destination Address IP Options Figure 5: Router and switch. ...read more.