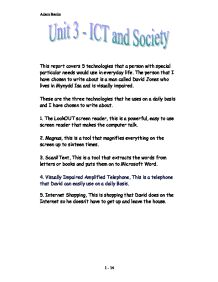 How technolgy effects a disabled person

This report covers 5 technologies that a person with special particular needs would use in everyday life. The person that I have chosen to write about is a man called David Jones who lives in Mynydd Isa and is visually impaired. These are the three technologies that he uses on a daily basis and I have chosen to write about. 1. The LookOUT screen reader, this is a powerful, easy to use screen reader that makes the computer talk. 2. Magnus, this is a tool that magnifies everything on the screen up to sixteen times. 3. Scan2Text, This is a tool that extracts the words from letters or books and puts them on to Microsoft Word. 4. Visually Impaired Amplified Telephone, This is a telephone that David can easily use on a daily Basis. 5. Internet Shopping, This is shopping that David does on the Internet so he doesn't have to get up and leave the house. The LookOUT screen reader This is a programme that gives a voice to David's computer, he now can hear what he types and can hear everything that comes up on his screen. He likes this because he doesn't have to strain to look at his screen. He also likes this because: * He can alter the speed of the voice. * He can alter the pitch and volume of the voice. * He can change the voice to male or female. * He can have a novice verbose mode. ...read more.

The only problems he has with the Magnus programme is that it is very expensive and he needs a good computer to run it, he doesn't earn much money so he struggles to pay for everything. He uses The Magnus programme for personal use so he can read everything that comes up on his screen. Scan2Text Scan2Text is a programme that copies the words from letters or books for example and puts them on to Microsoft Word. David likes Scan2Text because he can copy his letters to Microsoft Word and read them using Magnus and the LookOUT screen reader. He also likes Scan2Text because: * It can copy the writing in to Microsoft Word in over fifty different languages; he uses this because he has a pen pall that writes to him in French so he changes to writing to English using Scan2Text. * Because it works well in all windows environments. Advantages * Combines well with two of the other technologies that he uses. (Magnus and LookOUT screen reader) * David can read all his letters or listen to the computer read them if he is struggling. * David can translate words into over 50 different languages. * It works well in all windows environments. Disadvantages * He needs a good computer to work the programme. * The programme is expensive costing �60. * He has to already have his own scanner; the scanner is not included in the �60. ...read more.

Disadvantages * He has to spend over �50 in the shop to get the shopping delivered free; he often doesn't spend this many on groceries because he lives alone. * To be able to use the Internet he has to pay a lot of money every month to keep it running, and he earns very little money so it is hard for him to afford the Internet. * It costs David a lot of money to pay for the software to be able to use his computer. Evaluation Internet shopping fulfils David's need because he can now save himself a lot of time and effort because he doesn't have to go out to the supermarket any more. It also fulfils his needs because he can easily use it and it goes with his all of his computer software. The only problem that I can find with the Internet shopping is the again the price to use it. He has to pay for the Internet, which he can only just afford and he also has to pay for the software so he can use his computer. David's life is made a lot easier now he can use Internet shopping, he used to have to struggle around the supermarkets with he did not like. David said that he thinks that Internet shopping is a great technology and it is so easy to use and it saves a lot of time and effort. Internet shopping is used for personal use only, it is so David can get his shopping a lot easier and save a lot of his time. ?? ?? ?? ?? Adam Banks 1 - 14 ...read more.