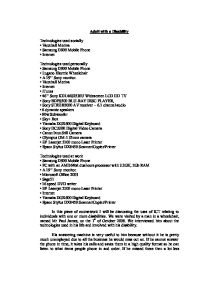 Mr James doesn't use filing cabinets because he can not reach them. This makes him feel uncomfortably asking his wife to get him files. Sony HD LCD TV/ Subwoofer/Blu-Ray DVDS - Mr James has trouble going to the cinema because he cannot access the seats. This means that he hast to sit at the back of the cinema and not get the best view he can because people keep walking up the aisles and blocking his view. To solve this problem he purchased a 46" HD TV with surround sound and subwoofer to get the cinematic feeling in his own home. He also gets the best quality graphics from his Blue-Ray DVDs. This benefits Mr James because he does not have to go through the hassle of getting into his wheelchair, getting into his car, getting into the cinema and back. It also enables him to get the best view in his own home because if you're in a wheelchair and you go to the cinema they put you at the back of the cinema. Digital answer machine - This plays a huge roll in Mr James life. It enables him to continue his business without answering the phone. If he was in another room he would not get to the phone in time because he would have to get of the sofa to get into his chair, he would then have to get into the room where the answering machine is and answer it. ...read more.

The internet is full of both good and bad things, programs that can be bought directly online that may help Mr James with his catalogue, and instant messaging, making it possible to talk to a person as if they were sitting in the same room, however, the internet also contains many viruses of all sorts and people who like to access files on your computer without permission, called hackers. The internet can be accessed through devices other than a PC, such as a number of mobile phones. Mr James has a Samsung D900 Mobile Phone which allows him internet access at almost any location due to its advanced bandwidth system while at the same time showing it on a QVGA 240 x 320 pixels '262,114 Colours TFT Screen all within a tiny 103.5 by 51 by 12.9mm size and weighing only 89g, this is very useful as he can call his friends, family and anyone associated with his business and can access the internet from anywhere in the world at any time, using only a tiny 85g device. The only downsides are that you have to keep the battery charged and it costs quite a bit of money, making it a valuable item and a target for people looking to steal phones, however, if the phone is stolen they can get it locked so that the person who stole it cannot use it. ?? ?? ?? ?? ...read more.