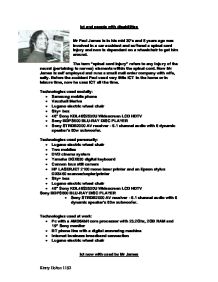 Ict and people with disabilities

This entertains him when he is bored. There are many advantages of Paul using the computer and other technology at home, one advantage is that Paul is never stuck for something to do; he can regularly check stock records, accounts and recent orders. There are also many disadvantages, for example Paul could loose work off the computer, and computers are not always that reliable. The digital answering machine helps Mr James to answer the phone when he is unable to get to it. As Mr James is in a wheel chair he can not get to the phone as fast as most able bodied people. If he did not have this technology he would miss many important business calls from his customers. Mr James and his wife, Sally, use digital cameras and a camcorder and they are just starting to investigate using their pc to edit and create their own videos. This technology helps Mr James to be more efficient in his business as he does not have to rely on other to print off the photos. If he didn't have this ability to plug the camera into the camera Mr James would have to go to the photo shop to get the pictures printed off. ...read more.

This piece of technology gives Mr James the independence to do his shopping without the hassle of actually going to the shops to do it. Despite this Mr James is sometimes let down by the quality of the goods that are delivered to him as they are not what he would have chose. Also he sometimes forgets to order things and misses out on in store deals. As it cost him for delivery every time he makes a order he cannot simply just add a item to his basket if he forgets something so he often has to wait till the next week. Paul is a member of a group similarly disabled people who use email to recommend places, events and companies who they have had good experiences with. This meets Mr James needs as he does not end up visiting an attraction that is unsuitable for him, meaning he has to rely on others to push him around. Mr James is now considering the use of a website to help expand his business, he is also considering a single webcam to allow him to communicate with his parents and friends in different parts of the country on a more personal basis than simply using the phone or email. ?? ?? ?? ?? Kirsty Holton 11S2 ...read more.