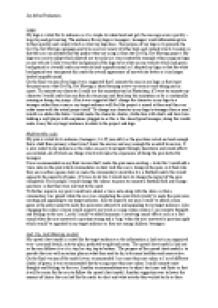 ICT Evaluation of my materials produced for a &quot;Get Moving&quot; health campaign.

﻿Jay Afruz Evaluation Logo My logo is suited for its audience as it is simple to understand and gets the message across quickly ? to get up and get moving. The audience for my logo is teenagers; teenagers want information given to them quickly and simply which is what my logo does. The purpose of my logo is to promote the Get Up, Get Moving campaign and to be used on variety of other tools and content which I created so that the user can identify that the product they are using is from the Get Up, Get Moving project. My logo was easy to adapt which allowed me to easily use it on content for example when using my logo on my website I didn?t want the background of the logo to be white on my website which had green background as it would make my website look unprofessional so I adapted my logo so that the white background was transparent this made the overall appearance of my website better as it no longer looked unprofessional. On the final version of my logo it was suggested that I animate the man in my logo so that it got the point across that Get Up, Get Moving is about keeping active via exercise and taking part in sports. To animate my character I could use the animation tool in Photoshop, if I were to animate my character I would make him run then do star jumps and then loop this animation so he is continually running or doing star jumps. Also it was suggested that I change the character in my logo to a teenager rather than a man as my target audience will feel the project is aimed at them and they can relate more with the actual project itself. To change my character in my logo to teenager from a man I would use adobe illustrator. ...read more.

My test buddy helped me a lot throughout the whole project giving me good feedback and the reasons behind his feedback. Also my test buddy was ahead in the work so he would regularly give me tips on what to do when I got to the point he was at so I won?t have as many problems as he did. For example before creating my website my test buddy told me that when creating my website I should work out the size I wanted the columns to be on my webpage to avoid me adjusting my whole website as I wanted to change the size. My role as a test buddy was to provide feedback to my test buddy about his work. As a test buddy I believe I done well as I would regularly give feedback to my test buddy rather than at the end when he would?ve finished his work. I think this was good as he would be able to make improvements to his work as he was doing it rather than waiting till he had finished then going back to make adjustments. I also told my test buddy the reasons behind my feedback I think this helped him because he would better understand why I thought something was good and bad about his work rather than him blindly following what I said. Overall in this project I think my performance had positive and negative aspects. I performed well in terms in completing my work in time but I also performed poorly when it came to the quality of the work. This meant I had to go back and ?fix? certain parts of my coursework folder which meant I had less time to create other content which was required of me to create. Time management was my poorest skill during this project as I didn?t manage time well and had to spend more time then I would?ve wanted ?fixing? work when I should?ve been using that time to create new content for the campaign. ...read more.

This is a good review for students to read as it contains some real strengths and also areas which clearly need developing.

Strengths include detail of suggested improvements; the use in lots of areas of a test buddy to give feedback; demonstrating an understanding of the evaluation points and criteria.

Whilst a good evaluation I would question the student's use of evaluation criteria. By this I mean they should really come from the analysis of the problem early on.

The depth of review helps lift the level of the work. Some of the quality of written communication could be better. In places it is weak.

In the final part of the evaluation the student refers to issues that they had with time management and organisation. Given the variation in the consistency of thoroughness and depth of the review this does sound as if it might be a good point but as pointed out in previous comments it needs to be articulated in a different way.

Overall this is a four star piece of work.