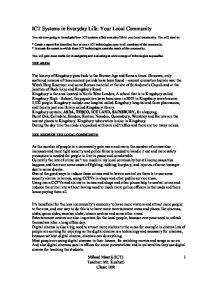 ICT Systems in Everyday Life: Your Local Community You are now going to investigate how ICT systems affect everyday life in your local community. You will need to: * Create a report that describes four or more ICT technologies open to all members of the community. * Evaluate the extent to which these ICT technologies meet the needs of the community. You will gain most marks for investigating and evaluating as wide a range of technologies as possible. THE AREA: The history of Kingsbury goes back to the Bronze Age and Roman times. However, only scattered remains of these ancient periods have been found - ancient cremation burials near the Welsh Harp Reservoir and some Roman material at the site of St.Andrew's Church and at the junction of Buck Lane and Kingsbury Road. Kingsbury is the area located in North West London, A school that is in Kingsbury called Kingsbury High - School, the population have been seen in 2005 in Kingsbury were become 5,532 people. Kingsbury include one hospital called Kingsbury hospital and three pharmacies, and there is just one library called Kingsbury library. Kingsbury contain: ASDA, TESCO, ICE LAND, SAINSBURY, for shopping. Burnt Oak, Colindale, Hendon, Kenton, Neasden, Queensbury, Wembley and Harrow are the nearest places to Kingsbury. Kingsbury tube station is also in Kingsbury. During the day time the roads are packed with cars and traffics and there are too many noises. THE NEEDS OF THE LOCAL COMMUNITY: As the number of people in a community gets more and more, the number of crimes also increases and more tight security and police force is needed to handle it out and more safety precaution is needed for people to live in peace and comfortable. Currently the rate of crime isn't too much in my local community but still some casualties happens and there are some cases of fighting, rubbing, burglary, and injuries of some teenager due to some drunks. ...read more.

For example, George Lucas shot "Attack of the Clones" with Sony HDW-F900 HDCAM camcorders outfitted with high-end pan vision lenses. The camera also has a similar light range and depth of field to film cameras. 2. Distribution - For the business side of the movie industry, the most compelling aspect of digital cinema is distribution. In today's system, production companies spend a lot of money producing film prints of their movies. Then, working with distribution companies, they spend even more money shipping the heavy reels of film to theatres all over the world, only to collect them again when the movie finishes its run. Because the distribution costs are so high, production companies have to be extremely cautious about where they play their movies. Unless they have a sure-fire hit, they take a pretty big risk sending a film to a lot of theatres. If you take the physical film out of the equation, things get a lot cheaper. Digital movies are basically big computer files, and just like computer files, you can write them to a DVD-ROM, send them through broadband cable or transmit them via satellite. There are virtually no shipping costs, and it doesn't cost the production company much more to show the movie in 100 theatres than in one theatre. With this distribution system, production companies could easily open movies in theatres all over the world on the same day. The digital distribution system also helps out the individual theatres. If a movie sells out, a theatre could decide to show it on additional screens on the spur of the moment. They simply connect to the digital signal. Theatres could also show live sporting events and other digital programming. 3. Projection - To the audience, the most important aspect of digital cinema is the projection system. This is the final piece of technology that controls how the movie actually looks at the end of the line. ...read more.

How this technology could be improved In the 1960s, the primary purpose of the ATM was to provide cash. However, today we can go to our bank's ATM to make a deposit or loan payment, to transfer funds between accounts, or to check our account balance. ATMs are used to obtain money from anywhere in the world. To carry a debit card means we can carry less cash on our person, which guards against money being lost or stolen. Some ATMs will even allow us to by postage stamps or add money to a prepaid cellular phone service. Although ATMs are common and helpful, people are reluctant to use them because of the misinformation associated with using ATMs. ATMs in the United States handle more than 10 billion transactions a year and the vast majority of the time transactions occur without glitches. Nevertheless, there are times when ATM users encounter problems. The use of ATMs makes it convenient for shoppers in the marketplace, yet it can be costly. For example, withdrawing cash from another ATM outside our bank's network may require us to pay a fee ranging form $1.00 to $4.00 per transaction. Such fees may seem small but they add up over time. To avoid paying ATM fees. Virtually all banks offer accounts with free ATM transactions to their own customer. However, some financial initiations do have accounts that charge their own customers an ATM fee. Therefore, it would be wise to look carefully at the accounts that are available and choose the one that meets people needs. For example, choose an account that allows free withdrawals from an institution with numerous locations. However, in the event our bank charges an ATM fee, it will probably be less than ATM fees at other banks. Bank may be able to provide us a listing of banks that will not charge us a fee, or we can find this information on the Internet. ?? ?? ?? ?? 1 Milaad Maarij (ICT) Teacher: Mr. Keshani Class: 10R ...read more.