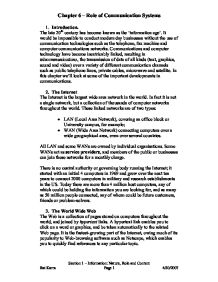 In this chapter we'll look at some of the important developments in communications.

1. Introduction. The late 20th century has become known as the 'information age'. It would be impossible to conduct modern day businesses without the use of communication technologies such as the telephone, fax machine and computer communications networks. Communications and computer technology have become inextricably linked, resulting in telecommunications, the transmission of data of all kinds (text, graphics, sound and video) over a variety of different communication channels such as public telephone lines, private cables, microwave and satellite. In this chapter we'll look at some of the important developments in communications. 2. The Internet The Internet is the largest wide area network in the world. In fact it is not a single network, but a collection of thousands of computer networks throughout the world. These linked networks are of two types: * LAN (Local Area Network), covering an office block or University campus, for example; * WAN (Wide Area Network) connecting computers over a wide geographical area, even over several countries. All LAN and some WANs are owned by individual organisations. Some WANs act as service providers, and members of the public or businesses can join these networks for a monthly charge. There is no central authority or governing body running the Internet; it started with an initial 4 computers in 1969 and grew over the next ten years to connect 2000 computers in military and research establishments in the US. ...read more.

A Modem (Modulator/Demodulator) converts the data from your computer from digital form (0s and 1s) into analogue or waveform so that it can be sent over the telephone line, which was originally designed for speech. Modems typically transmit data at rates of between 28,800 bps (bits per second) and 56,600bps. A second modem at the receiving end translates the analogue signal back into digital form. Many computers come equipped with an internal modem card in one of the free expansion slots inside the computer. (Most PCs have four to eight expansion slots into which you plug a variety of peripheral devices.) In the near future you will be able to access the Internet, send e-mails and order your shopping online using a mobile phone, as described below. 11. Software and services required to access the Internet To connect to the Internet you need to sign up with an Internet Service Provider (ISP) who will supply you with a user account on a host computer and a complete software package that includes: * A browser which enables you to download and view pages from the World Wide Web; * Communications software which allows your computer to transmit and receive data using the Internet TCP/IP communications protocol; * An e-mail package to enable you to send and receive e-mails; * A newsreader which you use to read and post messages to the User-net groups; * An FTP client, which you use to download and upload files and software. ...read more.

(4) 2 A large company has introduced a communication system, which includes electronic mail. This system will be used for both internal use within the company and for external links to other organisations. a) Describe two features of an electronic mail system, which may encourage its use for internal communication between colleagues. (2) b) Contrast the use of an electronic mail system with each of fax and the telephone. (6) c) Describe two functions the communication system might have, other than the creation and reception of messages. (4) 3 A company specialises in organising international conferences for doctors. The company has decided to make use of the Internet for advertising and organising the conferences, a) State, with reasons, the hardware that the company would need, in addition to their PC and printer, in order to connect to the Internet. (4) b) State the purpose of the following software when used for the Internet: i) Browser ii) Editor iii) E-mail software c) Explain three potential advantages for this company of using the Internet as opposed to conventional mail/telephone systems. 4 Facsimile and computer based electronic mailing systems are different forms of message systems. a) For each of these systems, describe two of the facilities offered. (4) b) Discuss the relative strengths and weaknesses of each of these systems. (10) Chapter 6 - Role of Communication Systems Section 1 - Information: Nature, Role and Content Rai Karra Page 1 4/20/2007 ...read more.