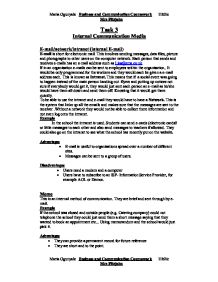 Task 3 Internal Communication Media E-mail/network/intranet (internal E-mail) E-mail is short for electronic mail. This involves sending messages, data files, picture and photographs to other users on the computer network. Each person that sends and receives e-mails has an e-mail address such as Lisa@ems.co.uk. If in an organisation e-mails can be sent to employees within the organisation.. It would be only programmed for the workers and they would each be given a e-mail address each. This is known as Intranet. This means that if a social event was going to happen instead of the main person handing out flyers and putting up notices not sure if everybody would get it, they would just sent each person an e-mail as he/she would have them all down and send them off. Knowing that it would get there quickly. To be able to use the intranet and e-mail they would have to have a Network. This is the system that links up all the emails and makes sure that the messages are sent to the receiver .Without a network they would not be able to collect there information and not even log onto the intranet. ...read more.

I.C.T. Department. That way would be much easier for the teacher to give the message and it would be much more convenient for the office as well. Parents can call up the school to give messages to there children and also teachers can call up parents to talk about the students success. If talks and lectures are to made and the lecturers can not make it then they can call up the school to cancel it. Advantages * They provide two-way communication * Problems can be sorted out quickly Disadvantages * There is no written record of the conversation * When using mobile phones, it is sometimes difficult to get a signal or the signal fails. Meetings Meetings can be also known as face to face communication. It is just like the telephone, an oral communication meaning a verbal conversation. Meetings can be just one person e.g. parent/teacher conference or it can be for many people e.g. P.T.A, staff meeting etc.. Example The student council holds a meeting. This would be really based on them touching on important subjects, discussing and sorting out social events , problems an so on. ...read more.

* Reports usually deal with complicated matters, which are best dealt within writing rather than other methods. Disadvantages * They can be complicated * The language can be too difficult for some people to understand. Letters are important an means of internal communication within an school because as there are so many people and most of the time information needs to be always given out, it is very useful to write letters by computer and it being printed and given to many people. This reason is because if spoken over tannoy then it would sometimes not be heard and if said by word of mouth it can sometimes be misunderstood. Although when said within an organisation it can be a different matter. My reason being because a school is full of children and is better given by written that word. Even through they may lose it al least the sender knows that they had received one . Now it is a workplace wear adults work and information (latest news) is not always given, it is really not that appropriate. It would be much better if it was announced or notices were put up. Maria Ogunyale Business and Communication Coursework 11b2/c Mrs Fitzjohn Maria Ogunyale Business and Communication Coursework 11b2/c Mrs Fitzjohn ...read more.