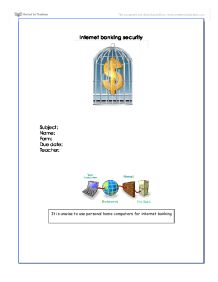 Internet banking security Subject: Name: Form: Due date: Teacher: Online banking is used for making transactions & payments over the Internet through a bank or credit union. This allows customers to do their banking outside of bank hours and from anywhere in the world, as long as there is internet access. Most major banks provide an internet banking service and there are also some internet only banking companies who offer all their services online and do not have high street branches. In most cases a web browser is utilized and any normal internet connection is suitable. No special software or hardware is usually needed though many exist. ...read more.

Online banking sites are very secure which means that the traffic of all information, including the password, is encrypted, making it extremely hard for a person to get the information after it is sent. However, as amazing as it sounds, encryption by its self does not completely stop hackers from gaining access to vulnerable home computers and stealing the password as it is typed in. To stop this many banks around the world have stopped allowing people to type the password and instead are making them use the mouse. Many online banking services also include a vital second layer of security. ...read more.

There are usually 6 numbers on the device and can be something like 02X6A6 or 7865VE. As time goes on the number of online banks that operate solely online continues to vastly increase, because of this the cost of running the bank is lower compared to traditional banks and so they often offer higher interest rates. In conclusion I believe that internet banking or online banking as it is commonly called is extremely safe and can be used with confidence as long as you follow the security measures provided. If you use a token you should always remember to lock it in your to prevent someone stealing it and breaking into your account. ...read more.

In summary, the report does show good understanding. However the student hasn't developed on these points, there do seem to have a 'good' understand but this isn't be used well enough to gain high marks. On the first page of ...

In summary, the report does show good understanding. However the student hasn't developed on these points, there do seem to have a 'good' understand but this isn't be used well enough to gain high marks. On the first page of the report, there haven't filled in their details, which should really be complete. It would be useful if the report could include examples/case studies of a bank which only provides their service via the Internet. Such as FirstDirect, which is only on-line. The student understands how internet banks use a number of measures to protect against unlawful access, such as encryption and passwords. However these aren't mention in-detail and this section will need developing further.

The statement 'It is unwise to use personal computers for internet banking' is in-correct. This is clearly an opinion, which is fine as-long as there have justified their own view. In this case, there haven't linked their opinion to any of the background research there have undertaken. This statement should be removed from the report, or developed to link this with the background understanding. There are very limited developed points within the report, as the report states 'This allows customers to do their banking outside of bank hours and from anywhere in the world'. Although why do consumer's need the ability to undertake on-line banking? The report should include something on the lines of 'The majority of people within the UK, will not have the time required to visit a Bank and view their transactions on a daily basis, as there will be too busy. Thus, internet banking allows consumer's a good alternative, which is often more convince for the consumer'.

The report states 'Credit Union', however the report doesn't explain what is meant by this term. All technical terms should be explain within the report, to allow the examiner to understand what the student is talking about.