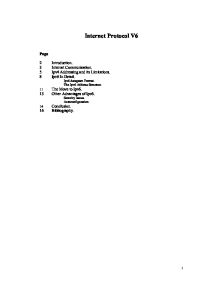 Internet Protocol V6 Page 2 Introduction. 3 Internet Communication. 5 Ipv4 Addressing and its Limitations. 8 Ipv6 In Detail. Ipv6 datagram Format. The Ipv6 Address Structure. 11 The Move to Ipv6. 13 Other Advantages of Ipv6. Security Issues. Autoconfiguration. 14 Conclusion. 16 Bibliography. Introduction In the early 1970s the U.S. Department of Defence challenged and sponsored the Advanced Research Projects Agency (ARPA) to create an indestructible network. ARPA rose to the challenge and produced a network that became known as the ARPAnet. The network was designed to share resources, send and receive information to/from anywhere, and operate without any central control, so that if any portion of the network should fail, the remaining portions would be unaffected. The ARPAnet has grown into what we now know as the ' Internet'. The word 'Internet' stands for: 'network of networks', and it is precisely that: a network that comprises of thousands of smaller regional networks which are scattered world-wide. Initially, the Internet was confined to academy, research and the government, but eventually the government decided to allow access to the Internet for commercial purposes. The business world soon came to realise that the Internet offered opportunities never before thought possible. They could offer a better service to their customers, improve operational efficiency, and perhaps more exciting was that their wares could be offered world-wide on what would be largely a virtual shop front. Since the mid 1990s, the Internet has seen a phenomenal growth rate. This is largely due to an increasing interest in the world wide web (WWW), the dramatic rise of modem speeds, and the decreasing cost of getting onto the Internet. As a result most schools, colleges and many homes and businesses now have connection to the Internet, and this growth is expected to increase with the introduction of Internet phones, Internet television, and other future potential products which may emerge with Internet interfaces. ...read more.

However, they are currently fighting a losing battle as routing tables are increasing in size faster than the routers can map, and if the growth of these routing tables is allowed to continue it could result in parts of the Internet becoming unreachable. As these problems started to become critical, an attempt to alleviate them came in the form of an alternative type of routing, called Classless Inter-Domain Routing (CIDR). The main aim of CIDR was to make efficient use of the remaining network address space, and to minimise the growth of the Internets routing tables. CIDR makes efficient use of the many remaining class C addresses, by eliminating the traditional method of the class A, B, and C address spaces. This was achieved by abandoning the fixed netid/hostid boundary, and employing a variable boundary that is dependent on the number of hosts attached to a network. Thus if a network manager requests addresses for a network that will have 1000 hosts, then a contiguous block of 1024 (210) class C addresses can be allocated. The variable boundary is achieved by the use of an address mask. The address mask is used to identify the division between the netid and hostid part of the address. Each gateway contains a copy of the address masks for each of the networks and uses this to route the packets to their destination, this allows for a single routing table entry to specify the routes to many individual networks. Although CIDR has been effective in stemming the depletion of address spaces, and the growth of the Internet's routing tables, it is clear that it cannot prevent the eventual exhaustion of the 32-bit Ipv4 address space. The solution to this problem comes in the form of a new version of the Internet; Ipv6. Ipv6 In Detail Ipv6 is effectively a new protocol, and although it has been designed mainly to provide a solution to the limited address space problem, it also includes many other features, which take care of other deficiencies associated with Ipv4. ...read more.

The facility will also be able to configure temporary addresses for users of mobile computing, such as laptops. Conclusion Ipv6 has many features and benefits over and above those provided by IPv4. Network Administrators are looking to provide robust, scalable, secure, high performance networks. This is proving difficult to achieve due to the continual requirement to update routers performance and routing tables, most of which is manually done. The issue of gaining a suitable IP address for sufficient users is not as easy now due to the depletion of available IP addresses. Subsequently when this is not possible the technological 'workaround' such as that provided by CIDR or NAT's means not all of your network is visible to the larger Internet and potentially bottlenecked, as all traffic has to pass through the translator before it can get onto a router. The ability of Ipv6 to allow auto configuration of routers and host Ipv6 addresses significantly reduces maintenance times and effort. Ipv6 is more efficient in terms of network traffic loads due to its ability to Unicast and Multicast along defined hierarchical routes. Ipv6's bit size and format allows for future development and with almost unlimited scalability and security should serve well as a standard for the foreseeable future The very fact that Ipv4 is insecure and open to misuse should be reasons enough to cause a conversion as soon, as is economically viable. The only major downside is the requirement to providing Dual stack Routers to enable the migration of data between IP versions whilst the two protocols remain in operation. Ultimately all networks will have to convert to Ipv6 because demand for IP addresses will continue to rise as more devices and technologies place demands on a finite resource. On a final note, it was found that Network protocols and their functionality is a major issue for businesses whose primary function is data transfer. For them to remain competitive they have to have efficient, secure and reliable communication methods. ...read more.