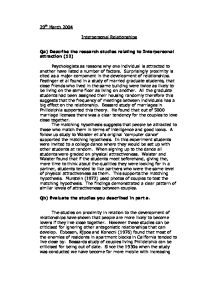 29th March 2004 Interpersonal Relationships Qa) Describe the research studies relating to Interpersonal attraction (12) Psychologists as reasons why one individual is attracted to another have listed a number of factors. Surprisingly proximity is cited as a major component in the development of relationships. Festinger et al found in a study of married graduate students, that close friends who lived in the same building were twice as likely to be living on the same floor as living on another. All the graduate students had been assigned their housing randomly therefore this suggests that the frequency of meetings between individuals has a big effect on the relationship. Bossard study of marriages in Philidelphia supported this theory. He found that out of 5000 marriage licenses there was a clear tendency for the couples to love close together. The matching hypothesis suggests that people be attracted to those who match them in terms of intelligence and good looks. A follow up study to Walster et al's original 'computer dance' supported the matching hypothesis. In this experiment students were invited to a college dance where they would be set up with other students at random. ...read more.

Not only does this have ethical repercussions of how the participant will feel being judged on their looks but it is also unreliable as everyone has different opinions on what is and what isn't attractive. Therefore who is to say that the four independent judges in Walster and Walster's studies have the same opinions of everyone else? Qc) Discuss psychological research into 'elecronic friendships/relationships (24) A new medium of communication has exploded into our lives, the Internet. Used for everything from gambling to business deals, the most interesting area for psychologists is the rise in interpersonal relationships formed and developed over the Internet. For many that conduct these 'Cyberaffairs' Internet dating is just as valid and meaningful as relationships based on face-to-face interaction. Hultin (1993) found that like in real life individuals seek people with similar characteristics as themselves, to engage in small talk over the Internet. However if they find that there are significant differences in attitudes and interests then they are likely to cease communication. McKenna and Yael (1999) supported the view that to those based in an Internet based relationship feel that it is as intimate as a 'traditional' one. However McKenna and Yael suggested that Internet relationships form more easily and develop quicker than 'normal' relationships. ...read more.

and IALIAF (I ain't laughing it ain't funny). When assessing Internet relationships and its future as a method of meeting people it is important to remember that the constraints that Internet dating may intern exist with other means of communication as well. The telephone and postal service have long been used as modes of starting and maintaining sexual relationships and friendships. Consequently it is likely that with the Internet the positives will out weigh the negatives and continue to be used by millions around the world. Walster et al tested this hypothesis by inviting students to a dance. When the students arrived to sign up for the dance four independent judges marked them on their physical appearance as a measure of social desirability. The students were then asked to fill out a questionnaire, two days later the dance was held and students were randomly paired together. During the dance students were required to fill out another questionnaire on the dance and their date. The results showed the less attractive students liked the more physically attractive students more, this study therefore contradicts the matching hypothesis. Physical attractiveness was found to be by far the most important indicator of whether the students would meet up again, overshadowing personality and intelligence. ...read more.