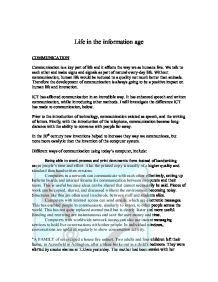 Life in the information age

Life in the information age COMMUNICATION Communication is a key part of life and it affects the way we as humans live. We talk to each other and make signs and signals as part of natural every-day life. Without communication, human life would be reduced to a quality not much better than animals. Therefore the development of communication is always going to be a positive impact on human life and interaction. ICT has affected communication in an incredible way. It has enhanced speech and written communication, whilst introducing other methods. I will investigate the difference ICT has made to communication, below. Prior to the introduction of technology, communication existed as speech, and the writing of letters. Firstly, with the introduction of the telephone, communication became long-distance with the ability to converse with people far away. In the 20th century new inventions helped to increase they way we communicate, but none more catalytic than the invention of the computer system. Different ways of communication using today's computer, include: Being able to word-process and print documents them instead of handwriting saves people's time and effort. Also the printed copy is usually of a higher quality and standard than handwritten versions. Computers in a network can communicate with each other effectively, setting up bulletin boards and internal forums for communication between computers and their users. This is useful because ideas can be shared that cannot necessarily be said. Pieces of work can be copied, shared, and discussed without the environment becoming noisy. Structures like this are often used in schools, between staff and students alike. ...read more.

Teachers have also benefited from technology available to schools. "Seventy-seven percent of public schools had a majority of teachers who used the Internet for instruction during the 2003-04 school year, up from 54 percent in 1998-99..."(Fox, 2005, p. 42) 2 Having ICT in classrooms and throughout schools is definitely on the increase. And today, teachers are able to have some of the finest software in their classrooms, to aid teaching. The whiteboard is still in use, but alongside a new SMART board which has been introduced to allow teachers to work with their computer while teaching. We are living in the Information Age. But people differ as to how the computer has affected education. Some people believe that ICT has done very little for developing the education system. For example, Oppenheimer (2003) in his book titled The Flickering Mind: the False Promise of Technology in the Classroom concluded that placing computers in the classroom has been almost "entirely wasteful." 3 EMPLOYMENT OPPORTUNITIES Over the years, ICT and computers have become part of the everyday workforce. Their abilities allow them to do tasks which mean that they are now part of the bigger picture of employment. This analysis looks to explore how ICT plays a part on employment opportunities, and what effect it is having on people. Employment, all over the world, has been simply grouped into three different stages: primary, secondary and tertiary work. In some cases it is more than just these three stages. Primary work lies at the beginning of the process of work. People who work in the primary sector of society find and gather raw materials. ...read more.

Did I push the transfer button once or twice? Security is important for people who want to avoid fraud. Case-study - An article from the BBC website in 1998. Online banking has taken off "The days of having to stand in a bank queue to pay a bill or transfer money have come to an end. BBC News Online's Andrew Yates looks at a banking renaissance. Fed up of giving up your lunchtime to go and visit the bank only to be confronted by a huge queue of people? Help is at hand. Now bank customers are being given the chance to manage their finances how and when they want, from the comfort of their own homes. Online banking promises to transform the way we bank. The UK's major financial institutions are introducing new services which will allow us to become our own bank managers. Checking balances, paying bills and transferring money can be done with the click of a button. That is just the beginning. Soon anything from pensions to mortgages will be sold regularly on the Internet and customers will even be able to bank via their television sets. "3 We are in the Information Age. One of the key differences which have taken place over the last ten years is the opportunity of online transactions, which have been presented to the public, and embraced. It has benefited the public, but presented problems for people who operated in the physical shops and businesses. Jobs are being put in jeopardy. However at the same time, new positions are being presented as the website systems introduced need to be controlled. Benefits outnumber the drawbacks of this little corner of the Information Age, and it is one of the highlights of the technological movements happening today. ...read more.