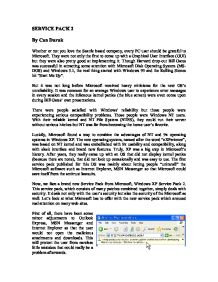 SERVICE PACK 2 By Can Duruk Whether or not you love the Seattle based company, every PC user should be grateful to Microsoft. They were not only the first to come up with a Graphical User Interface (GUI) but they were also pretty good at implementing it. Though Harvard drop-out Bill Gates was successful in attracting some attention with Microsoft Disk Operating System (MS- DOS) and Windows 3.1, the real thing started with Windows 95 and the Rolling Stones hit "Start Me Up". But it was not long before Microsoft received heavy criticisms for the new OS's unreliability. It was common for an average Windows user to experience error messages in every session and the infamous kernel panics (the blue screen) were even come upon during Bill Gates' own presentations. There were people satisfied with Windows' reliability but those people were experiencing serious compatibility problems. Those people were Windows NT users. With their reliable kernel and NT File System (NTFS), they could run their server without serious hitches but NT was far from becoming the home user's favorite. Luckily, Microsoft found a way to combine the advantages of NT and 9x operating systems in Windows XP. ...read more.

The real thing that comes with Service Pack 2 is a new icon added to Control Panel, Security Center. The center controls three essential things to ensure your security, the Automatic Updates, Virus Protection and Firewall. From that Center, you can see which of those three components is working (indicated by a green light) or not working (indicated by a red light). The center also tells you to update your Anti-Virus program (No, Service Pack does not come with an integrated anti-viral software; you have to use your own). The Internet Connection Firewall, first presented in Windows XP also changes its name to Windows Firewall and comes with new features. With this firewall, you are able to manage your socket connections as you wish. This means you can manage all of your connections at one place and let (or forbid) any program to establish a connection under any port. This new firewall is surely rich in features but it also has some disadvantages. The firewall comes active as default and it becomes really a hassle if you have your own server of some sort and use programs that connect to Internet very often. ...read more.

The Microsoft's answer to threat on Neowin.net does not seem satisfactory as well. Microsoft tells that a user should be granted administrator rights to run such a program but you should know that XP Home default user is already administrator and nearly everyone works in Admin Mode in XP Pro to avoid problems while installing programs and hardware. Moreover, the release date for the new SP2 also seems inopportune, just before the end of summer. This is especially bad for schools because they won't have the necessary time to try the new Service Pack and bring solutions to possible problems. Even IBM has declared their hesitance to include SP2 in all their new PCs because of the possible compatibility problems the users would experience. Despite of the possible problems this Service Pack may cause you, it is quite an improvement in terms of security. It is not an easy download for a dial up user (it is nearly 200 Megabytes) but you can still order a free CD from Microsoft web site. If you are part of the fortunate people who have a broadband connection, just check the Microsoft web site for the problematic programs, make sure your programs would still work after the update (consult the program's web site) and start downloading the new SP2. ...read more.