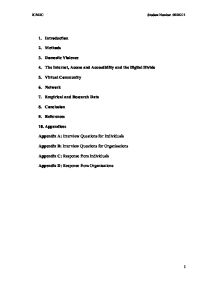 My research concerned how the Internet could be used to help people who were experiencing domestic violence. My investigations revealed that the Internet is an effective way for people to communicate, especially in groups of interest

1. Introduction 2. Methods 3. Domestic Violence 4. The Internet, Access and Accessibility and the Digital Divide 5. Virtual Community 6. Network 7. Empirical and Research Data 8. Conclusion 9. References 10. Appendices Appendix A: Interview Questions for Individuals Appendix B: Interview Questions for Organisations Appendix C: Response from Individuals Appendix D: Response from Organisations Introduction Castell states that "we live in a global economy characterised by the flow and exchange of information and cultural communication". (Castells:2000:pg182) Whilst this statement is a view of technological determinists, one whom believes that technology is driven by society ,this assumption is a reasonable claim as the Internet, a series of networks that has changed the way people communicate, reflects and creates distinctive cultures. Through the Internet, communities have been created. According to Rheingold, an authority on the Internet, for there to be virtual communities, there must be interactivity over the Web. Equally, Castells has based his ideas on the fact that networks have formed a new culture, a culture of "real virtuality". This cultural network, more appropriately described as a community network, will be examined. Nicoll points out that technology has changed how societies access and distribute information. Technology has 'offered new and faster ways of human communication' (Lea & Nicoll, 2002, p. 182).The information society, with its use of the Internet, has changed the way we make relationships, but its impact on culture can be explored further. Another consideration is that the information society includes an information economy and an information culture. For instance, if the citizens of Britain cannot access information with their limited resources, then that information will not be spread widely enough. As Britain is a capitalist society, it is quite evident that the knowledge economy will reflect the divide between 'the haves' and the 'have-nots'. This could be deemed unimportant by some, but many members of society cannot afford luxuries, or even necessities, and therefore they might be excluded from participating in a technology-based information culture The 'have-nots' are not the ...read more.

In an article by Nina Wakeford entitled "Networking women and GRRLS with information/communication technology," the author discusses the fact that the presence which women have created on the web is a response to images of computing culture web and the creation of GRRL Web sites . , Which are created by women who address issues without acting like victims and have to shift attention away from the erotic stereotype of women on the web. Which is the intention of the NAADV web site to provide information to empower women not them to feel like victims and in addition to this, is created by a women for women. Nevertheless it is essential to observe participation by women on the web. This should indicate whether there is a female presence that will utilise the NAADV website (Bell, 2000, p.351). Before going into further detail on the nature of people's participation in digital networks and, potentially through them, in a knowledge-based society, it is worth noting a couple of additional points about access and cost as a barrier First women have too many responsibilities in an article called Weaving Together Family and Work it is stated that women traditionally have too many domestic tasks, such as housework and childcare, to want or even have time to use the Internet. If the British government is serious about getting women involved in technology, it should provide better childcare. Although this would cost money, it would be a good investment. If this does not happen, the knowledge-based economy will not benefit from women's contributions. Second, in 'Women and the digital divide', it is argued that women have been excluded from enjoying the digital revolution. As one commentator puts it, there has been some debate on 'whether women are benefiting as much as men from the new technologies, or whether the digital revolution reinforces existing gender inequalities in the job market and other parts of the economy' (http://itmatters.com.ph/column/yam_12052002.html). ...read more.

To prepare the research setting for my question, I decided to interview my clients, domestic violence organisations that have a Web presence and women whom the Internet had helped and to observe message board and newsgroup activity. After researching the ethics of the situation, I posted a message openly to all the groups I had observed and asked them directly whether the Internet had been of any help to them. I thought that the Web site would grow successfully because statistics show there was a 12% increase in women's access to the Internet. However, training needs to be provided to encourage women's interest in getting access to technology. In 'Women and the digital divide', it is argued that women have been excluded from enjoying the digital revolution. There has been some debate on 'whether women are benefiting as much as men from the new technologies, or whether the digital revolution reinforces existing gender inequalities in the job market and other parts of the economy' (http://itmatters.com.ph/column/yam_12052002.html). During the observations, the message boards were a great support mechanism About ten women answered pleas for support and help. The Internet is clearly a place where women are able to drop their guard. Announcing my presence did not affect activity. My experience of working with the newsgroups was different, however. I received one detailed response. I believe this was because with newsgroups people are able to answer e-mails from the comfort of their e-mail accounts without having to go on to the Web message board. I can now conclude that there are different ways of using the Internet to receive support. For example, women can use the information Web sites, the message boards and newsgroups. I found that the Internet can help women who are experiencing domestic violence by providing information, resources, message boards and newsgroups communities in which women in a similar situation or women who have been in such a situation in past are able to support each other. I was able to observe this first hand and fully confirm that the Internet does provide help to women. ...read more.