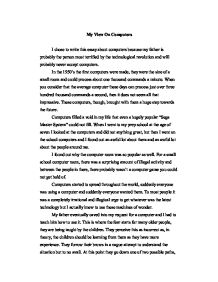 My View On Computers

My View On Computers I chose to write this essay about computers because my father is probably the person most terrified by the technological revolution and will probably never accept computers. In the 1950's the first computers were made, they were the size of a small room and could process about one thousand commands a minute. When you consider that the average computer these days can process just over three hundred thousand commands a second, then it does not seem all that impressive. These computers, though, brought with them a huge step towards the future. Computers filled a void in my life that even a hugely popular "Sega Master System" could not fill. When I went to my prep school at the age of seven I looked at the computers and did not anything great, but then I went on the school computers and I found out an awful lot about them and an awful lot about the people around me. I found out why the computer room was so popular as well. For a small school computer room, there was a surprising amount of illegal activity and between the people in there, there probably wasn't a computer game you could not get hold of. ...read more.

and "Why have you put that password thing on the computer?". At first I would just give a string of buzzwords and he would seem satisfied. "I'm just optimising the hard drive to give the screen a higher resolution." Just as the last of the "spooked" adults returned from their hiding places along came the Internet. Internet access was a must for me. My argument went something like this: "Wow dad, look at all these pictures of stars and planets, they could be really useful for my Physics homework. There is so much information on the Internet these days and almost all of it could be used in my schoolwork. Imagine me going to school with my work bristling with extra information and me getting A's and finally winning the respect I deserve. You don't want to hold me back from that do you?" This left me father little choice, the Internet it was. The Internet though was criticised by many journalists, who I do not doubt, have probably never been on the Internet in their lives. Then one of the kids on the Internet ruined the state of paradise we had had for so long. ...read more.

I have private messaged 4 different people at one time being someone different in each conversation. A different person with a different personality, different quirks and a different life. Next is e-mail, yes, even e-mail is scary, complex and, in my father's own word, "Evil". Now my parents disliked e-mail so much that if I wish to contact a relative I must use the phone and risk getting into a conversation about how school is going, how I am and how well the relative in question's curtains match the sofa. This is why I do not contact relatives. I once wrote my Christmas thank you letters and sent them by e-mail. When they found out I had done this it my father's reaction went beyond fear, it was sheer wide-eyed terror followed quickly by anger. I got a 15-minute lecture and sent to my room. I saw no reason why the letter could not travel to their houses at 50 million kilometres per hour. In conclusion I believe that computers can be used as tools for both good and evil. They can be used to improve our standard of living a lot and if adults came to terms with their existence then I'm sure they would be very grateful for the usefulness of these machines. ...read more.