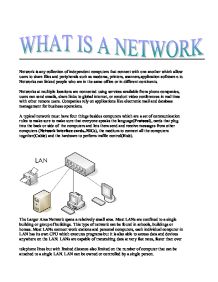 Network is any collection of independent computers that connect with one another which allow users to share files and peripherals such as modems, printers, scanners,application software e.tc

Network is any collection of independent computers that connect with one another which allow users to share files and peripherals such as modems, printers, scanners,application software e.tc. Networks can linked people who are in the same office or in different continents. Networks at multiple locations are connected using services available from phone companies, users can send emails, share links to global internet, or conduct video conferences in real time with other remote users. Companies rely on applications like electronic mail and database management for business operations. A typical network must have four things besides computers which are a set of communication rules to make sure to make sure that everyone speaks the language(Protocol), cards that plug into the back or side of the computers and lets them send and receive messages from other computers (Network interface cards..NICs), the medium to connect all the computers together(Cable) and the hardware to perform traffic control(Hub). The Larger Area Network spans a relatively small area. Most LANs are confined to a single building or group of buildings. This type of network can be found in schools, buildings or homes. Most LANs connect work stations and personal computers, each individual computer in LAN has its own CPU which executes programs but it is also able to access data and devices anywhere on the LAN. ...read more.

The cabling it uses for this type of connection is called 'Intranet' the intranet uses the same technology and protocols as the Internet but is restricted to certain users. The cabling is called category 5. For example a big UK company like Superdrug, may have an Intranet in their main offices that is only available to employees of Superdrug. Star Star network has a central connection called a hub or switch. Devices connect to the hub or switch with unshielded twisted pair (USP) Ethernet. Star networks are used in many homes. Star networks requires a lot of cable, failure in star network cable will take down one computer's network access and not the entire LAN only if the hub fails the entire network fails. Ring In a Ring network every device has exactly two neighbors for communication purposes. All messages travel through a ring in the same direction either clockwise or counterclockwise, a token is passed from computer to computer. Failure in any cable or device breaks the loop and can take down the entire network. No server is needed which reduces cost and management but if one computer goes down then the whole network goes down, because the packet/frame needs to pass through each computer to get to its destination. ...read more.

A switch can connect ethernet, token ring, fibre channel or other types of packet switched network segments together. Hub A hub is a common connection point for devices in a network. Hubs are commonly used to connect segments of a LAN. A hub contains multiple ports. It serves as communication wiring point to help information flowing through one central location to any other computer on the network. It is the central part of the star topology. Router Routers are very similar to hubs in that they allow connections of shared communication between different computer equipment. Computers attached to the shared routers can access the same printers, files, or an internet connection. In addition, network routers add a layer of protection from malicious programs. Conclusion In conclusion although we need all the above technology for the setup of networks we still need software like Novell, cables, connectors and network cards. There are some advantages in having a network in that you save by users sharing expensive peripheral devices like lasers and printers. Networks allow us to stay in touch with people next door and all over the world without leaving our homes whethers its LAN, MAN, WAN or CAN which allows businesses and government organisations to share important information. ?? ?? ?? ?? ...read more.