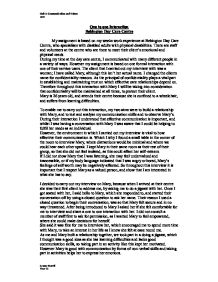 One to one Interaction - Bebington Day Care Centre

One to one Interaction Bebington Day Care Centre My assignment is based on my weeks work experience at Bebington Day Care Centre, who specialises with disabled adults with physical disabilities. There are staff and volunteers at the centre who are there to meet their client's emotional and physical needs. During my time at the day care centre, I communicated with many different people in a variety of ways. However my assignment is based on one formal interaction with one of their service users. The client that I carried out my interview with was a woman; I have called Mary, although this isn't her actual name. I changed the clients name for confidentiality reasons. As the principal of confidentiality plays a vital part in establishing and maintaining trust on which effective care relationships depend on. Therefore throughout this interaction with Mary I will be taking into consideration that confidentiality will be maintained at all times, to protect their client. Mary is 26 years old, and attends their centre because she is confined to a wheelchair, and suffers from learning difficulties. To enable me to carry out this interaction, my two aims were to build a relationship with Mary, and to test and analyse my communication skills and to observe Mary's. During their interaction I understood that effective communication is important, and whilst I was having a conversation with Mary I was aware that I could be helping to fulfil her needs as an individual. ...read more.

Furthermore, during the interview I used different forms of non-verbal communication, by expressing body language to illustrate my thoughts and feelings, which I could not verbalise. I used facial expressions whilst talking to Mary by smiling at the things she said, and by raising my eyebrows when she was speaking to show that I was paying attention. I also wanted her to know that she could talk for as long as she wanted, with me patiently listening, which made her smile as she knew from my expressions that I was interested. This is why I used eye contact as a sign of respect and to show that I was a friendly person. I continued using open questions by asking Mary what sort of activities interest her here at the centre, as she replied, her face lit up with excitement. This demonstrated to me that she was happy talking about her hobbies here, as the pupils in her eyes dilated with anticipation. Throughout this one to one interaction, I gave Mary plenty of personal space, without making her feel that I was moving away from her. I sat a reasonable distance from her, in which we both felt comfortable and where she did not feel overcrowded. When Mary and myself were seated I made certain that we were both positioned at the same level, so she did not feel threatened or overpowered. ...read more.

* Pace- spoke slowly so Mary was able to understand me * Used her first name- as a sign of respect for Mary Effective communication in care settings depends on the ability of being able to listen well, through active listening. This involves the linguistic, or spoken aspects of what the person says and the paralinguistic aspects through the quality and features of a person's voice when speaking. During their interaction, I thought that it was vital for Mary to know that I was listening to her, which I achieved by: * Good eye contact- to show I was paying attention * Empathising with Mary to show that I was 'with' her in terms of what she was saying * Active listening through paralinguistic and non- verbal aspects * Facial expressions- by smiling and frowning at the right time * Checking understanding by clarifying what Mary had said and by repeating some of the spoken words back to her * Nodding my head to show I understood what she was saying. As Mary was speaking to me she would make sure that I was listening to her, by asking me to repeat back to her what she would say. This shows to me, that she was comfortable speaking to me and wanted my attention at all times, to respond to what she was saying. ?? ?? ?? ?? Unit 2: Communication and Values AO1 Leanne Farrell Year 12 ...read more.