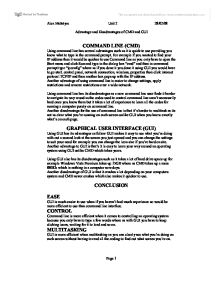 pro's and con's of GUI and CMD

Advantage and Disadvantages of CMD and GUI

Using command line has several advantages such as it is quick to use providing you know what to type in the command prompt. For example if you wanted to find your IP address then it would be quicker to use Command line as you only have to open the Start menu and click Run and type in the dialog box “cmd” and then in command prompt type “ipconfig” where as if you done it you done it using GUI you would have to go start, control panel, network connection, wireless, properties then click internet protocol TCP/IP and then another box pops up with the IP address.

Another advantage of using command line is easier to change settings, apply restrictions and remove restrictions over a wide network.

Using command line has its disadvantages as a new command line user finds it harder to navigate its way round as the codes used to control command line aren’t necessarily hard once you know them but it takes a lot of experience to learn all the codes for running a computer purely on command line.

Another disadvantage for the use of command line is that it’s harder to multitask as its not as clear what you’re running on each screen unlike GUI when you know exactly what’s on each page.

Using GUI has its advantages as follow GUI makes it easy to see what you’re doing with out a second look at the screen you just opened and you can change the settings to suit your need for example you can change the icon size if you’re hard on site.

Another advantage to GUI is that’s it is easy to learn your way around an operating system using GUI unlike CMD which takes years.

Using GUI also has its disadvantages such as it takes a lot of hard drive space up for example Windows Vista Premium takes up 15GB where as CMD takes up a mere 880Kb which is nothing in a computer now days.

Another disadvantage of GUI is that it crashes a lot depending on your computers system and CMD never crashes which also makes it quicker to use.

GUI is much easier to use when if you haven’t had much experience so would be more efficient to use than command line interface.

Command line is more efficient when it comes to controlling an operating system because you only have to type a few words where as with GUI you have to keep clicking icons, waiting for it to load and so on.

GUI is more efficient when multitasking as you can clearly see what you’re doing on each screen without having to read all the coding to find out what screen you’re on.

Command line is more speed efficient because you don’t have to wait for things to keep loading and command line rarely crashes where as windows operating systems crash frequently.

Command line is more resource efficient as it only takes up 880 Kb which is nothing compared to an operating system which can take up 15 GB and sometimes more and command line only requires a keyboard to control it where as GUI requires a mouse and a keyboard.

Command line is more efficient when scripting as it only takes a few lines of code to execute a program, however GUI you can create shortcut icons and other things to make using it quick but this takes up space and is still no where near as quick as command line.