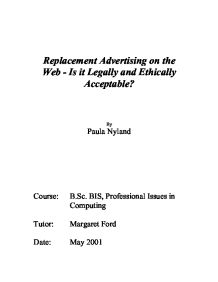 Replacement Advertising on the Web - Is it Legally and Ethically Acceptable?

Replacement Advertising on the Web - Is it Legally and Ethically Acceptable? By Paula Nyland Course: B.Sc. BIS, Professional Issues in Computing Tutor: Margaret Ford Date: May 2001 Summary This report discusses the legality and ethics of a new piece of software launched in February 2001, which allows ISP's to overlay advertising banners on any web page on the net with adverts sold by, and controlled by them. Investigations led to discussions about Copyright infringement and European Competition Law. Many examples of Case Law were also investigated for their possible links with issues arising from the use of this software. Contents Summary 2 Contents 3 Introduction 4 Replacement Advertising on the Web 5 Background 5 Findings 6 The Copyright Issue 7 The Competition Issue 8 Conclusion 9 Recommendations 10 References 11 Bibliography 11 Web Sites 11 Case Law 11 Statutes 12 Appendix A 13 Appendix B 14 Appendix C 15 Appendix D 16 Introduction This report is being written to try to understand the issues raised, both legally and ethically, by the release of a new piece of software (Fotino) onto the Internet market. In an attempt to answer whether this software is an acceptable addition to the world of the web, only replacement advertising as facilitated by Fotino software will be considered. This is due to the fact that since my investigations into this subject began other software packages have come to light, which may be able to perform this function in a slightly different way. The problem posed by this software has required investigations from both a practical and theoretical standpoint, in that in practice the software has not yet been adopted by any of the Internet Service Providers (ISP's) ...read more.

44). For instance in 'Sinanide v La Maison Kosmeo, it was held that to quote a bit of a sentence of a literary work was too small a matter on which to base a copyright infringement action.' (Bainbridge 1999, p. 44). Similarly, should the resulting overlaying of an advertisement by Fotino actually be seen as a copyright infringement, then is the advert such a small part of the whole web site that the De Minimis Principle would apply? However, should this not be the case and the advert be seen to be a substantial part of a web page - due to the revenue it raises to allow the web page to be funded and appear on the web in the first place - then perhaps the case of Shetland Times Ltd v Dr Jonathan Wills (Appendix D), would come into play. Here 'The copying verbatim of headlines by one web site operator from another web site operator held to constitute infringement of copyright under s. 20 Copyright designs and Patents Act 1988.' (<URL:http://www.lawtel.co.uk>). The headlines, although only a very small part of the whole newspaper/web site, were seen to be a significant part because of the information imparted by them and therefore a substantial part of the whole. This can also be seen in Spectravest Inc v Aperknit Ltd where it was said; In considering whether a substantial part of the plaintiff's work has been reproduced by the defendant, the attention must primarily be directed to the part which is said to have been reproduced, and not those parts which have not.' ...read more.

Computers play a massive part in today's society, because computers are a major part of our lives. By using Fotino the ISP will be able to give consumers more of what they want to see and the advertiser more targeted advertisements, who really wants US advertisements for products not available in the UK. It seems to me that there is room for both selected (as provided by Fotino) and none selective advertising (available on all web pages), especially where the delivery media (the World Wide Web) is world wide and ISP's tend to operate within the boundaries of one country. We will not know if Fotino will cause a legal storm as suggested in the Telegraph article on 12th February 2001 (Appendix A) until the ISP's begin to use it. As of today there is no-one using it, perhaps it is too hot to handle. In the presentation of this information given to colleagues in my lecture group the question was asked as to whether they considered Fotino to be legal. Out of the 15 answers returned, 12 thought that Fotino would prove to be illegal and 3 thought it would be legal. Recommendations It seems to me that it would be wise for any ISP considering using Fotino to consult their legal teams and seek expert advice before going ahead with this software. They will need to thoroughly investigate the possibilities of legal action and the areas in which they may be challenged. Whatever the outcome, it will be interesting to see if any of the legislation and case law discussed in this report, will be used should Fotino cause legal action to be taken against any ISP brave enough to use the software in the future. ...read more.