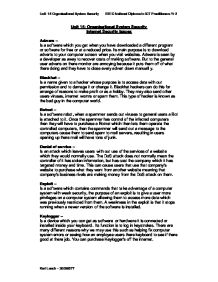 Is a software which you get when you have downloaded a different program or software for free or at a reduced price. Its main purpose is to download adverts to your computer screen when you visit websites. Adware is seen by a developer as away to recover costs of making software. But to the general user adverts on there monitor are annoying because it puts them off of what there doing and they have to close every advert down manually.

Is a name given to a hacker whose purpose is to access data with out permission and to damage it or change it. Blackhat hackers can do this for arrange of reasons to make profit or as a hobby. They may also send other users viruses, internet worms or spam them. This type of hacker is known as the bad guy in the computer world.

Is a software robot, when a spammer sends out viruses to general users a Bot is attached to it. Once the spammer has control of the infected computers then they will have to purchase a Botnet which then lets them operate the controlled computers, then the spammer will send out a message to the computers cause them to send spam to mail servers, resulting in users opening up there mail will have tons of junk.

Is an attack which leaves users with out use of the services of a website which they would normally use. The DoS attack does not normally mean the controller of it has stolen information, but has cost the company which it has targeted money and time. This can cause users that use that company’s website to purchase what they want from another website meaning that company’s business rivals are making money from the DoS attack on them.

Is a software which contains commands that take advantage of a computer system with weak security, the purpose of an exploit is to give a user more privileges on a computer system allowing them to access more data which was previously restricted from them. A weakness in the exploit is that it stops running when a newer version of the software is installed.

Is a device which you can get as software or hardware it is connected or installed inside your keyboard. Its function is to log in keystrokes. There are many different reasons why we may use this such as helping fix computer system errors or seeing how an employee users there keyboard to see if there good at there job. You can purchase Keylogger’s off the internet.

Is a software or hardware which is used to analyze traffic that is passing through over a network. The packet sniffer checks each packet then decodes them so that they can be analyzed, to check there content. The analyzing is useful for finding out network problems, monitor network usage from users and debug client and network protocols. This will help maintain a network.

Is a term given that is a breech of security by a hacker. Such as attempting to acquire sensitive information on other computer users like there usernames, passwords and credit card information. The hackers target popular websites such as eBay, MySpace and PayPal. They get hold of user’s personnel information by sending fake emails pretending to by your bank.

A Trojan is a computer virus that appears on your computer designed to cause your computer harm. It has been know to be similar to a worm. Some Trojans may not cause harm to your computer but the six main types of Trojans are ones that cause remote access, data destruction, download, get on to a server, anti – viruses software disabler and denial of service attack.

Is the name given to a hacker, who’s purpose is to prevent a breech of security within a company or organization. They are normally employed by a company to protect against there counterparts blackhat hackers who want to hack and steal information and data that does not belong to them. In the computing world the Whitehat hacker is know as the good guy.

Is a computer program which sends copies of its self to networks, designed to cause harm to the network that they have targeted. It likes to eat up the bandwidth used on the network. Worms can also cause serious harm and damage to a computer operating system by attacking the weak parts of the computer.

Is a threat to computers, by trying to take control of computer applications that are unknown or patchfree. The attacker that controls the zero-day attack normally sets it up on a public forum because of the number of users that it could affect.

Is a computer that has been attached to the internet by a computer hacker. The owners of zombie computers do not know that there computers have be compromised. They are normally used as part of a botnet, but while they have been put in zombie mode the hacker can use other user’s computers to send Trojans or other harmful viruses.