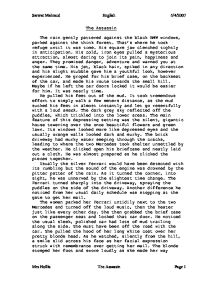 The Assassin The rain gently pattered against the black BMW windows, parked against the think forest. That's where he took refuge until it was time. His square jaw clenched tightly in anticipation. His cold, iron eyes pulled a mysterious attraction, almost daring to join its pain, happiness and anger. They promised danger, adventure and warned you at the same time. His jet, black hair, spiked in any direction and his slight stubble gave him a youthful look, however experienced. He groped for his brief case, on the backseat of the car, and made his route towards the small hill. Maybe if he left the car doors locked it would be easier for him. It was nearly time. He pulled his feet out of the mud. ...read more.

As it turned the corner, into sight, he was unnerved by the slightest time change. The Ferrari turned sharply into the driveway, spraying the puddles on the side of the driveway. Another difference he noticed from her usual daily schedule was stopping at the gate to get her mail. The woman parked her Ferrari untidily next to the two Mercedes and turned off the loud music, then the heater just like every other day. She then grabbed the brief case on the passenger seat and locked that car door. He noticed the usual sleek, polished car had lots of mud trailing along the side. She must have been off the road with the car. She pulled the hood of her long white coat over her pretty blonde head. ...read more.

The bullet, at full speed, pushed through the skin, cracked through the breast bone and made a passed through her heart leaving a whole through her body. Her heart made one last beat and then a rich texture of warm, dark blood oozed out. He packed away, calmly taking the rifle apart, placing it neatly in the briefcase. He picked up the cloth and looked around for any link of human presence. He made his way down the hill as the rain removed his foot prints in the mud. The man then placed a cloth into his car, not wanting the leather to get wet. Who would, it was a BMW. The assassin started the engine and drove away, not even looking back in his rear view mirror. He never looked back. Sarwat Mahmud English 5/4/2007 Mrs Hollis The Assassin Page 1 ...read more.