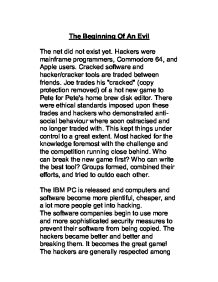 The Beginning of an Evil the Net Did Not Exist Yet.

The Beginning Of An Evil The net did not exist yet. Hackers were mainframe programmers, Commodore 64, and Apple users. Cracked software and hacker/cracker tools are traded between friends. Joe trades his "cracked" (copy protection removed) of a hot new game to Pete for Pete's home brew disk editor. There were ethical standards imposed upon these trades and hackers who demonstrated anti-social behaviour where soon ostracised and no longer traded with. This kept things under control to a great extent. Most hacked for the knowledge foremost with the challenge and the competition running close behind. Who can break the new game first? Who can write the best tool? Groups formed, combined their efforts, and tried to outdo each other. The IBM PC is released and computers and software become more plentiful, cheaper, and a lot more people get into hacking. The software companies begin to use more and more sophisticated security measures to prevent their software from being copied. The hackers became better and better and breaking them. It becomes the great game! The hackers are generally respected among other programmers; their skills admired. Being a hacker was a good thing. The BBS age - The modem came into wide spread use. Soon BBS's (Bulletin Board Systems) sprang up all over the place. These were computers with one or more modems attached to them. You could connect with other users of the BBS here. You could chat, download files, send mail, and post messages on these systems. ...read more.

The Web Age With the domain name system in place the World Wide Web is born. There is an explosion of computer users going on-line. The BBS's quickly move to the web, and now the tools and tricks get very widespread distribution. Windows and GUI interfaces take over, and we now have point and click hacking. This leads to a new kind of hacker, called "script kiddies". The script kiddies have very low skills, but they don't need skills with the new tools. This new web also makes everyone anonymous. This anonymity makes the kiddies bold, and they feel they can do anything with no repercussions. This sets off a wave of anti-social behaviour that rocks the net. Viruses, Trojan horses, DOS attacks. Malicious hacking becomes the norm and the old style curious hacker becomes a vanishing breed. Security becomes a major issue, but for every security hole plugged, two new ones open up. Shell accounts become even more important now, and hiding your tracks becomes both easier, and more important. Laws are passed and the FBI and SS get into the act. So far law enforcement has had little effect. They can only catch the real losers, those who are too ignorant or stupid to cover their tracks. The good ones, the informed ones, make their attacks with impunity, and even when detected the attacks mostly going unreported for fear of bad publicity. ...read more.

The reality of this is far more shocking and real. The way we could work around this new and on going problem would be to have a lot stricter censorship on films and on the media itself. Neutralise the poison at the bite. To stop the "professionals" tying to access your computer you could invest in a firewall. These are complicated things (why is it that people insist in complicating what could be very simple?) which sit in your Internet provider's computer. You have no control whatsoever over them. These firewalls are only as good as the people who maintain them. These also have holes in their workings which people can crawl through which makes them utterly useless. Anti virus software is a useful weapon in the war. A vaccination for nearly every virus is available but with new virus on the go everyday the pharmacy of anti virus software runs dry. Yes they can filter the Internet. They could close down one of the thousands of websites but for everyone they close down another five would pop up. The only way they could completely destroy the world of the Internet Terrorist would be removing his only source of life, the Internet itself. But why should the enjoyment of millions be sacrificed for the malicious use of the few. This is a war, which will go on for as long as time itself does. Man against man using computer against computer. This is the war of the Internet. ...read more.