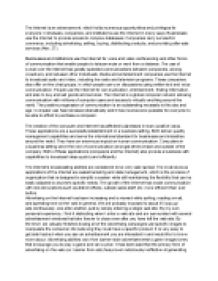 The creation of the computer and Internet has affected businesses in many positive ways.

The Internet is an advancement, which holds numerous opportunities and privileges for everyone. Individuals, companies, and institutions use the Internet in many ways. Businesses use the Internet to provide access to complex databases. Companies carry out electric commerce, including advertising, selling, buying, distributing products, and providing after-sale services (Ater, 27). Businesses and institutions use the Internet for voice and video conferencing and other forms of communication that enable people to telecommute or work from a distance. The use of e-mail over the Internet has greatly speeded communications between companies, among coworkers, and between other individuals. Media and entertainment companies use the Internet to broadcast audio and video, including live radio and television programs. These companies also offer on-line chat groups, in which people carry on discussions using written text and voice communication. People use the Internet for communication, entertainment, finding information, and also to buy and sell goods and services. The Internet is a global computer network allowing communication with millions of computer users and access to virtually anything around the world. The positive progression of communication is an outstanding necessity to this day and age. Computer use has increased dramatically and it has now become possible for everyone to be able to afford to purchase a computer. The creation of the computer and Internet has affected businesses in many positive ways. ...read more.

allow advertisers to find out how effective/ineffective a given advertisement actually is. The negative aspect is the actual hard work of trying to figure out exactly how to attract people and get them to respond to your ad. According to recent research, the number of online users in the US is expanding rapidly. In addition, within the last year, online commerce (which is considered to be the large scale buying and selling of goods and services) transactions have become commonplace (Einstein, 21). This given statement is another excellent reason why the Internet and computers are a positive advancement for businesses. When customers go on-line, they are most often looking for information on specific types of products or trying to find savings on products they need. This is clearly a booming potential market and one that will significantly impact the way that advertising and commerce is conducted over the upcoming years. -"Approximately 64.2 million US adults (32.5 percent of the adult population) currently use the Internet, according to the Spring 1999 CyberStats report from Mediamark Research, Inc." (Almost 65 Million Americans Online, cyberatlas.internet.com, May 1999)-"According to EMarketer&#39;s ECommerce Study], by year-end 1999, the number of online buyers will double to 36.1 million, or 16.6 percent of the U.S. population 14 and older. By the year 2002, eMarketer says the U.S. will have 63.7 million online buyers, representing nearly one-third or 28.4 percent, of all Americans 14 and older. ...read more.

By bringing more exposure to your site you gain another method of promotion that excels more that what television, newspapers and radio have to offer. The creation of the computer and Internet has held an important role in intercommunication within a company. The &#39;distance learning&#39; process, reveals a widespread interest in using the Internet for education-from-home. Distance learning is a process of learning from home by means of video instruction and e-mail. It involves teaching or learning a skill for a job. For instance, instead of paying for a group of employees to attend a training seminar, you are able to produce an &#39;at work/home&#39; seminar, subtracting the travel fees, which will in the long run, save your business money. The Internet has contributed to the success of small businesses in the international market. Early hopes of Internet-based commerce have not proven themselves to be the route that such commerce was expected to take, but the growth of the Internet and its associated technology have become the lifeblood of many businesses that otherwise would have remained tabletop businesses with only local influence (Einstein, 37). The most successful Internet ventures have been products over services, but each has seen growth. The arrival of the secure electronic transaction has relieved the fears of many who formerly were would-be purchasers that have now joined the growing numbers of consumers and businesses taking advantage of the opportunities of the Internet. Many people are beginning to over come the apprehension of ordering products on-line. It is something that has gradually become safer and more efficient. # ...read more.