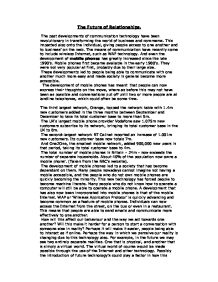 The Future of Relationships.

The Future of Relationships. The past developments of communication technology have been revolutionary in transforming the world of business and commerce. This impacted also onto the individual, giving people access to one another and to business' on the web. The means of communication have recently come to include wireless Internet, such as WAP technology. And even the development of mobile phones has greatly increased since the late 1990's. Mobile phones first became available in the early 1980's. They were not very popular at first, probably due to their large size. These developments led to people being able to communicate with one another much more easy and made society in general become more accessible. The development of mobile phones has meant that people can now express their thoughts on the move, where as before this may not have been as possible and conversations put off until two or more people are at landline telephones, which could often be some time. 'The third largest network, Orange, topped the network table with 1.4m new customers added in the three months between September and December to take its total customer base to more than 5m. The UK's largest mobile phone provider Vodafone saw 1.075m new customers subscribe to its network, bringing its total customer base in the UK to 8m. The second-largest network BT Cellnet reported an increase of 1.001m new customers. ...read more.

People are becoming more dependent on this technology and many of us now take it for granted. I for instance, would have to be writing this essay on paper with a pen for example without the current technological advances that are available. Our relationships with one another are now finding technology as a medium between the two. If we want to communicate with one another more and more often it will be via the use of technology. Even the basic telephone connects two or more people together in a conversation. What is happening now is that we are finding better and faster ways of making such communication possible. Relationships have become stronger in my opinion because of these advances. I think that this is true because I believe that people who are able to make contact more easily with one another do, and I feel that because of this they will. This has been shown by the increased use of mobile phones. Whether it be through actual speaking or through the use of text-messaging people are still generally making more contact with each other. This could mean that relationship problems are dealt with quicker then would be if only telephones existed. But not only are problems dealt with faster, but also easier. People are able to express themselves differently in text form than in conversation. ...read more.

Telephones are ill suited for mobile Internet access for many reasons: * The distance between the human ear and mouth dictates their brick-like form factor. Design for data-rich interaction is better achieved with a less elongated form factor. * The keypad dominates too much of the surface area. An Internet device should allocate close to 100% of its surface area to the screen to maximize the amount of information and user interface it can show. * A numeric keypad will always be a poor device for entering anything except phone numbers. * Multi-modal designs that integrate visual display with audio and/or voice commands are awkward because they force users to transfer the handset between the ear and a viewable location. Even the current primitive touch-tone services are painful to use on a mobile phone. Fortunately, there are alternatives. Several use a deck-of-cards form factor, including the Palm Pilot, the PocketPC, or the Blackberry. Of the three, the PocketPC may win because it allocates the biggest percentage of its area to viewable screen real estate. At the same time, the Blackberry's QWERTY keyboard is surprisingly pleasant to use compared with the poor handwriting recognition we are currently offered. Of course, future devices will likely have better handwriting recognition, and pen input will likely solve many mobile-device problems, since the pen can also be used to directly manipulate on-screen interface widgets. How to handle voice calls? Use an earplug with a dangling microphone. Many cell phone users already employ this style of hands-free calling. ...read more.