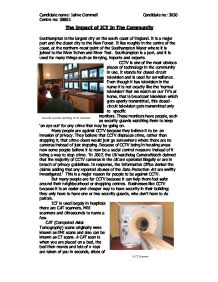 The impact of ICT in the community

The Impact of ICT In The Community Southampton is the largest city on the south coast of England. It is a major port and the closet city to the New Forest. It lies roughly in the centre of the coast, at the northern-most point of the Southampton Water where it is joined to the River Itchen and River Test. Southampton is a port, and it is used for many things such as ferrying, imports and exports. CCTV is one of the most obvious pieces of technology in the community in use. It stands for closed-circuit television and is used for surveillance. Even though it has television in the name it is not exactly like the 'normal television' that we watch on our TV's at home, that is broadcast television which gets openly transmitted, this closed-circuit television gets transmitted only to specific monitors. These monitors have people, such as security guards watching them to keep 'an eye out' for any crime that may be going on. Many people are against CCTV because they believe it to be an invasion of privacy. They believe that CCTV displaces crime, rather than stopping it, that crime-doers would just go somewhere where there are no cameras instead of just stopping. ...read more.

MR is a softer way to look at the body than CT and is normally used in muscular or tissue diseases. It uses no ionizing radiation like CT. The scanner makes a magnetic field which aligns the magnetization of hydrogen atoms in the body. Again there are different or specialist types of MRI scans, these are: * Diffusion MRI * Magnetic resonance angiography (MRA) * Magnetic resonance spectroscopy (MRS/MRSI) * Functional MRI (fMRI) * Interventional MRI * Radiation therapy simulation * Current density imaging (CDI) * Magnetic resonance guided focused ultrasound (MRgFUS) * Multinuclear imaging People can find MRI scans to be very disconcerting; many people are put under general anaesthesia when undergoing a MRI scan. Pregnant women and children especially find it hard not to move. People with claustrophobia normally have to go under anaesthesia too. Other people can wear headphones to listen to music or watch a movie while in the scanner. Ultrasound is cyclic sound pressure with a frequency greater than what the human ear can hear. It is mainly used to see fetuses in a mother womb. Ultrasounds are used to: * Date the pregnancy * Confirm fetal viability * Determine location of foetus * Check the location of the placenta in relation to the cervix * Check for the number of fetuses * Check for major physical abnormalities * Assess fetal growth (for evidence of intrauterine growth restriction) ...read more.

The US Air Force has monitoring stations in many countries such as Hawaii, Kwajalein, Ascension Island, Diego Garcia, and Colorado Springs, Colorado. The information is sent to Air Force Space Commands main base in Colorado Springs, where they get regular updates from the other monitoring stations. The user segment is the GPS receiver. Generally GPS receivers are made of an antenna which is tuned to the frequencies transmitted by the satellites, receiver-processors and a stable clock. It may also contain a display for providing information to the user. A receiver is often described by its number of channels, which has progressed over the years from 3 or 4 to (in 2006) twelve and twenty channels. GPS is a easy way to travel around, making it simpler and quicker to get somewhere, SatNav is commonly used now to find a way to get to somewhere the driver doesn't know how to. There are choices of routes, the user can choose to go the fastest, shortest, most scenic, longest, slowest, least use of motorway, most use of motorway to name a few. The user can choose to have a voice to tell them where to go so that they don't have to keep looking at a screen to see where to go so that they don't get distracted. ?? ?? ?? ?? Candidate name: Jaime Gemmell Candidate no: 3050 Centre no: 58805 ...read more.