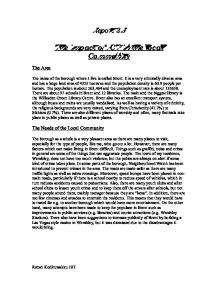 The impact of ICT in the local community

Report 3D The impact of ICT in the local Community The Area The name of the borough where I live is called Brent. It is a very ethnically diverse area and has a large land area of 4325 hectares and the population density is 60.9 people per hectare. The population is about 263,464 and the unemployment rate is about 135658. There are about 97 schools in Brent and 12 libraries. The main and the biggest library is the Willesden Green Library Centre. Brent also has an excellent transport system, although buses and trains are usually vandalised. As well as having a variety of ethnicity, the religious backgrounds are very mixed, varying from Christianity (47.7%) to Sikhism (0.7%). There are also different places of worship and often, many festivals take place in public places as well as private places. The Needs of the Local Community The borough as a whole is a very pleasant area as there are many places to visit, especially for the type of people, like me, who go out a lot. However, there are many factors which can make living in Brent difficult. Things such as graffiti, noise and crime in general are some of the things that can aggravate people. The town of my residence, Wembley, does not have too much violence, but the police are always on alert if some kind of crime takes place. In some parts of the borough, Neighbourhood Watch has been introduced to prevent crimes in the area. ...read more.

The first ATMs accepted only a single-use token or voucher, which was retained by the machine. These worked on various principles including radiation and low-coercivity magnetism that was wiped by the card reader to make fraud more difficult. The idea of a personal identification number (PIN) stored on a physical card being compared with the PIN entered when retrieving the money was developed by the British engineer James Goodfellow in 1965, who also holds international patents regarding this technology. ATMs first came into wide UK use in 1973; the IBM 2984 was designed at the request of Lloyds Bank. The 2984 CIT (Cash Issuing Terminal) was the 1st true Cash point, similar in function to today's machines. All were online and issued a variable amount which was immediately deducted from the account. (History of ATM taken from Wikipedia) Advantages * Very accessible. * Reduces pollution as people don't have to go to the bank to get money. * Less time wasted as people don't have to go to the bank to get money. * Very secure * Harder for fraud * Only have to carry a plastic card to take money out of ATM machine * More time to bond as a community as less time is wasted to get cash * Encourages people to spend more money so local businesses flourish * Accessible anytime, anywhere (open 24 hours) Disadvantages * Fake ATM's can be installed to get customers' card information * Someone can steal the money that people had just withdrawn * Stolen credit cards can be used to get others ...read more.

Internet caf�s help my community by providing a way for the people without a computer in my area to have access to a computer. By having this privilege, the people in my area can do many things such as chatting to their friends and family who may live far away (e.g. another country) and have difficulties communicating (esp. the cost of talking on the phone is too high); managing their bank accounts if they are unable to go to the bank (e.g. when the bank is closed); and paying their bills if the residents have forgotten to pay easily. The drawback for using internet caf� is that the administrator may have installed silent programs such as key loggers to record the information the users have entered. This information can be used to hack in to the people's bank accounts and transfer money without permission. Also, cyber caf�s can create problems such as increased violence and crimes in certain areas as some people, especially youths, would "hang out" in or near internet caf�s. Other difficulties would be theft in the caf� themselves and/or the shops near it. In conclusion, my opinion is that internet caf�s bring more advantages to people that the disadvantages it causes. The most important reason for my support in cyber caf�s is that is give the people that freedom to explore that internet as well as discovering the various functions of the computer systems. Undoubtedly, they don't bring any good news for the environment, but it does bring the whole community in unison to look after one another. ?? ?? ?? ?? Ronan Kodituwakku 10T ...read more.