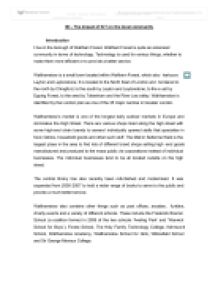 The impact of ICT on the local community. I live in the borough of Waltham Forest. Waltham Forest is quite an advanced community in terms of technology. Technology is used for various things, whether to make them more efficient or to provide a better serv

3D - The impact of ICT on the local community Introduction I live in the borough of Waltham Forest. Waltham Forest is quite an advanced community in terms of technology. Technology is used for various things, whether to make them more efficient or to provide a better service. Walthamstow is a small town located within Waltham Forest, which also harbours Leyton and Leytonstone. It is located to the North East of London and bordered to the north by Chingford, to the south by Leyton and Leytonstone, to the east by Epping Forest, to the west by Tottenham and the River Lea valley. Walthamstow is identified by the London plan as one of the 35 major centres in Greater London. Walthamstow's market is one of the longest daily outdoor markets in Europe and dominates the High Street. There are various shops lined along the high street with some high-end chain brands to several individually opened stalls that specialise in food, fabrics, household goods and other such stuff. The Mall in Selborne Walk is the largest place in the area to find lots of different brand shops selling high-end goods manufactured and produced to the mass public via corporations instead of individual businesses. The individual businesses tend to be all located outside on the high street. The central library has also recently been refurbished and modernised. It was expanded from 2006-2007 to hold a wider range of books to serve to the public and provide a much better service. Walthamstow also contains other things such as post offices, arcades, funfairs, charity events and a variety of different schools. These include the Frederick Bremer School (a coalition formed in 2008 of the two schools 'Aveling Park' and 'Warwick School for Boys'), Forest School, The Holy Family Technology College, Kelmscott School, Walthamstow Academy, Walthamstow School for Girls, Willowfield School and Sir George Monoux College. There is also the Walthamstow Town Hall. ...read more.

Books are free to loan and CDs and DVDs come at a small charge. This allows people who can't afford to buy such things to simply borrow them and give them back. People have free or cheap access to things they usually would have to pay for. People of all kinds are allowed to enjoy books due to the library. People can use this system to reserve books from libraries not just in their local one, i.e. Newham Library and such as the system is connected between all the branches. This means that it is much easier to track a book you might not be able to find elsewhere as there is a large source in which you are searching in. People can also have internet access via laptops due to the public WiFi connection in the library. People who don't usually have access to such privilege can do so via the library. They can do all sorts of things to the internet e.g. research, study or even play games. There is also a 'quiet room' where these people can go so they won't be disturbed in any way. People can find a place to go to where they can focus and not be distracted. The library also gives people free access to computers as long as they have a library card. People are given the chance to work on these computers if they don't have one themselves and it's all a free service. This means that people who can't maintain their own computer or internet are given the chance to via a library. The library becomes an important place for people like this. The library also offers children/adult sessions on various things like singing groups, computer classes etc. These can be extremely helpful for busy parents who can simply leave their children here where they would be looked after and socialise with other kids. ...read more.

The most effective use of the CCTV is that it can be placed in a large variety of places, watching crime from even the most dangerous areas. This allows it to be able to reduce crime no matter where it takes place. The metropolitan website aims to make London a much safer place. This provides reassurance in the community and they have access to a lot of the resources located in the site. People are able to confide in crimes while keeping their identity a secret. This stops people from being scared of being caught for snitching which can provide harsh consequences for the snitch in relation with his friends. The anonymity provides reassurance and a sense of security. Summary * The simple presence of CCTV deters criminals * If it captures a crime, it can be used as evidence * Efficient method of sending camera feed to the corresponding connection where it is being monitored * Keeps places such as schools safe * Can be placed wherever it needs to be * The website aims to keep London safe * Allows people to confide in crimes they've witnessed while staying anonymous * Provides reassurance to people who are having from witnessing a crime How it fails to meet the community's needs However, people do complain that CCTV makes for a lack of privacy for people. People feel that it invades what should be personal space. It is also quite expensive and advanced to set up as a whole. The CCTV system requires skill and knowledge of ICT to be able to set up properly and also a lot of money. Summary * Invasion of privacy * Expensive to set up * Can be quite advanced to set up Conclusion Overall, CCTV and the Metropolitan website work extremely well in keeping London secure and crime free. People are less worried about crime wherever they go and it adds an assurance to people knowing they are being protected. ?? ?? ?? ?? Name: Sadian Choudhury Candidate number: 7027 Leytonstone School 13411 ...read more.