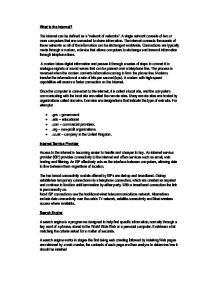 What is the internet? The internet can be defined as a "network of networks". A single network consists of two or more computers that are connected to share information. The internet connects thousands of these networks so all of the information can be exchanged worldwide. Connections are typically made through a modem, a device that allows computers to exchange and transmit information through telephone lines. A modem takes digital information and passes it through a series of steps to convert it to analogue signals or sound waves that can be passed over a telephone line. The process is reversed when the modem converts information coming in from the phone line. Modems transfer the information at a rate of bits per second (bps). A modem with high-speed capabilities will assure a faster connection on the Internet. Once the computer is connected to the internet, it is called a local site, and the computers communicating with the local site are called the remote sites. Many remote sites are hosted by organizations called domains. Domains are designations that indicate the type of web site. For example: * .gov - government * .edu - educational * .com - commercial providers. * .org - non-profit organizations. * .co.uk - company in the United Kingdom. ...read more.

For educational applications, an extranet can allow staff and pupils to access the school or college intranet from their home computers via an internet connection. Intranet An intranet is a way of sharing private information and resources in the form of a web site among a group of related users, such as employees of a company or pupils and staff of a school. Users access an intranet using web browser software, which is just like accessing a conventional web site. They can follow links, browse pages and download documents from an intranet in the same way as they would from a web site. An intranet can only be accessed from a computer that is directly connected to a private network, such as a school or college network. Web Browser A web browser is a software application that allows users to display and interact with text, images, and other information typically located on a web page at a website on the World Wide Web. Web browsers allow a user to quickly and easily access information provided on many web pages at many websites by traversing links,known as hyperlinks. Web browsers are the most commonly used type of HTTP user agent. ...read more.

The UK police can only deal with cases where: * The people who created the material are in the UK * The material had been published or downloaded onto computers in the uk. * It might be evidence of offences committed in the UK. * It might be evidence of crimes committed by UK citizens travelling abroad. Police can only deal with offensive material that break the law. If reporting illegal material then there are several steps: * The offensive material needs to be reported to the Internet Watch Foundation (IWF). They were set up int 1996 by major internet firms to focus on removing illegal based material of the internet. * Offensive material is reported through the IWF hotline. It is then assessed and , if action is to be taken, the IWF notifies the service provider and the police. The IWF is only able to deal with material that falls into the following three categories: * Child Pornography located anywhere in the world * Adult material that would breach the Obscene Publications Act, but only if the offending site or service is hosted or registered in the UK. * Criminally racist material - but only if it is physically hosted in the UK Biblolgrapghy * http://www.met.police.uk/computercrime/index.htm * http://www.iwf.org.uk/ * Internet Facts. Martin Noble. Starfire. ISBN 1-903817-95-1 ...read more.