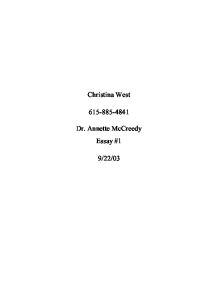 Christina West 615-885-4841 Dr. Annette McCreedy Essay #1 9/22/03 The Internet makes people more isolated. Isolation is to be separated from others. The Internet does not produce the expanded sense of community we think it does. Granted, getting on the Internet connects people to the world in a virtual reality sense, but not in reality. Some people tend to devote most of their time to the computer and not to their families. I know of many people like this, in a way I am one of those persons. The community the Internet produces consists of chat rooms, instant messaging, e-mail, message boards, games, and many ways of staying in contact with people. Not to mention the many web pages that can be searched at the click of a button. Anything that is worth doing and studying can be found by looking through search engines like Google or Yahoo. ...read more.

I, for one, play a 3D game called Counter- Strike. This game is team-based and casts players in the role of terrorist or counter-terrorist. It involves talking to people through a microphone and typing on the keyboard. Working with teammates is a must so there is a lot of communication. Some people even take it as far as joining a clan. Being in a clan involves being on the computer even more. Clans play in matches to try to become the best clan in the world. I do mean world, people even play this game in Sweden and Australia. The Cyberathlete Amateur League is the premiere center for online gaming tournaments in North America. They organize tournaments for clans and the winners can win prizes sometimes in the amount of two hundred thousand dollars. This league's tournaments are so popular clans from all over the world come to participate in them for prizes. ...read more.

When the Internet and all of the great things it can bring, people get in the way of life and responsibilities, then that's when it can cause a problem. I had a distant family member that this happened to. She stayed on the computer constantly, did not take care of her son and never went to work. She lost many jobs, homes, and even her son because of her addiction and isolation. I don't think people realize the seriousness that isolating all of their time to the Internet can do. The Internet is a useful tool but it does have its drawbacks. The use of games like Counter-Strike and online chat rooms may not be a good alternative for the real world. Continuous time put into the computer leaves someone isolated from his or her family and friends. People should know their limits and responsibilities and not let Internet interfere with their daily lives. Using the Internet should be a plus in life not a way of life. 2 West ...read more.