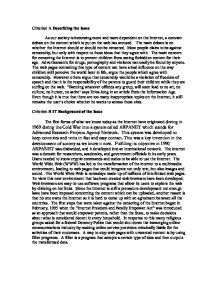 The main debate is on whether the Internet should or should not be censored.

Criterion A Describing the Issue As our society is becoming more and more dependent on the Internet, a constant debate on the content which is put on the web has aroused. The main debate is on whether the Internet should or should not be censored. Most people claim to be against censorship, but only with respect to those ideas that they agree with. The main concern for censoring the Internet is to prevent children from seeing forbidden content for their age. Advertisements for drugs, pornography and violence can easily be found by anyone. The web pages containing this type of content can have a bad influence on the way children will perceive the world later in life, argue the people which agree with censorship. However others argue that censorship would be a violation of freedom of speech and that it is the responsibility of the parents to guard their children while they are surfing on the web. "Banning whatever offends any group, will soon lead to no art, no culture, no humor, no satire" says Erica Jong in an article from the Information Age. ...read more.

Family Empower Act" was introduced as an approach that would empower parents, rather than the State, to make decisions about what is considered decent in every household. In response to this many religious groups asked for a federal Decency Police that would shut down the immerging online communications industry by making online service providers criminally liable for the activities of their customers. A way to stop web pages with unwanted content is by using filter programs. A filter is a program that accepts a certain type of data and then outputs the transformed data. Criterion C Analyzing the Impact of the Issue There Internet holds an enormous amount of information regardless to its content. Surely censoring the Internet will have a major impact on the society. It is hard to predict whether it will have a positive or a negative impact; the only definite thing is that it will never be the same once censored. Society has taken two different approaches in dealing with this problem. The first is just leaving it alone, and not looking at what offends them. ...read more.

These filters should ban the access to certain URL lists and words, which can be considered inappropriate, once they are activated. However even though this solution seems suitable, many problems can arise, such as not filtering the correct content. The second solution is also based on filtering, but not by a program but by your Internet Service Provider. Your ISP should track all your actions on the Internet and in case something looks suspicious (for example searching on how to make bombs) they should immediately report it to the police for investigation. But this solution has ethical implications since your privacy is being violated and the ISP might use the you. The first solution is probably better since it can be controlled by the user himself and he can keep his freedom. A filter program can also be adapted to the new needs and development of the Internet. Criterion E Selecting and Using Sources 1. [1]http://www.cybercollege.com/internet.htm Internet Censorship (Monday, 28 Jan) 2. [2]http://www.slais.ubc.ca/courses/libr500/fall1999/www_presentati ons/c_hogg/unitedstates2.htm Obscenity and the Internet in The US (Monday, 28 Jan) 3. [3]http://www.slais.ubc.ca/courses/libr500/fall1999/www_presentati ons/c_hogg/unitedstates.htm The legal history of Internet Censorship and Pornography in the US. (Monday, 28 Jan) 4. [4]http://www.ftc.gov/bcp/conline/pubs/online/teachers.htm How to Protect Kids' Privacy Online (Monday, 28 Jan) 5. [5]http://www8.zdnet.com/products/content/zdim/0212/zdim0010. ...read more.