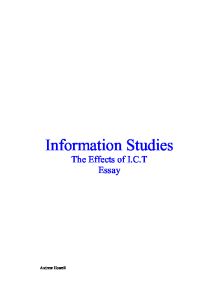 The Social and Economic Effects of I.C.T

Information Studies The Effects of I.C.T Essay The Social and Economic Effects of I.C.T We are now in an "information age" and our society is very dependent on information storage and communication. Around the World millions of people and companies are dependant on computers to process information. Some of the main uses of computers are based around advertising. Software technologies such as the Internet have created and opened new paths, never thought imaginable before. Computers are constantly being updated and upgraded so that they are capable of executing most 21st century tasks. Below is a list of programs, applicable to computers that are used worldwide. Computers, Software and the Internet Microsoft Excel Databases: Allows the user to store any type of information whether its Numerical or alphabetical. Microsoft Word Document: Enables the user to construct letters and word-based documents, then able to forward to any other machine via the Internet. Internet: A super technological space often referred to as the "information superhighway". Hundreds and thousands of people are able to access the Internet through their computer. The Internet is basically a big chain in which people can join themselves to by logging on. ...read more.

They are normally search-based sites, which allow you to search the .box.sk Network for illegal products such as password crackers, hacks, viruses and much more. CCG's are just one of the illegal products that can be found on Crack Networks, they use a complex formula, which can create new and old credit card numbers that would pass most security checks, mainly because they were created using the official formula. Protection Against Criminal Activity Although all of these security risks are a strong deterrent to buying a Internet surfing computer, there are programs that have been created In order to protect yourselves from the hacking ability of others, these are known as Firewalls. Firewalls are basically applications, which are active (running) whilst you are connected to the Internet. They alert you as to any incoming or outgoing operations or tasks being executed from either your machine to the Internet, or from the Internet to your machine. They then give you the opportunity as to whether to allow the action to continue or whether to terminate the task. Some sophisticated and may I say expensive firewalls also give you the opportunity to track where the operation(s) ...read more.

All it means is that the person who owns one needs one or has more money than the person who doesn't own a computer, The are thousands of examples like this around the world which involve the same issue e.g. Some people have cars, others don't, I own a computer console, my friend doesn't and somebody I know owns a certain toy or game, which I haven't bought. What I'm basically saying is that everyone in the World has something that somebody else hasn't, so how can you think about the issue of equality over a simple computer when in the same instance there are much greater things that cause inequality like slavery and poverty. I conclude that by introducing computers into society has a worldwide sphere of influence over all aspects of life including jobs, life-styles, the environment, privacy, crime and technological advances. Through the introduction of computers a whole countries work structure can be turned on its head and the level of sophistication of a countries industrial side can strengthen and rise in power. IT (Information Technology) is now an important part of our everyday lives and we are totally dependant on computers, at the moment. If all the computers in the World were to just stop functioning, there would be total chaos and the world would take decades to recover. ?? ?? ?? ?? Andrew Howell ...read more.