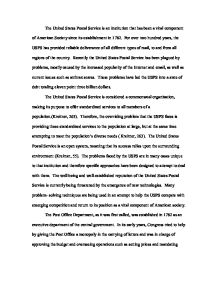 The world of the United States Post Office is rapidly transforming due to the spread of email messages.

The United States Postal Service is an institution that has been a vital component of American Society since its establishment in 1782. For over two hundred years, the USPS has provided reliable deliverance of all different types of mail, to and from all regions of the country. Recently the United States Postal Service has been plagued by problems, mostly caused by the increased popularity of the Internet and email, as well as current issues such as anthrax scares. These problems have led the USPS into a state of debt totaling eleven point three billion dollars. The United States Postal Service is considered a commonweal organization, making its purpose to offer standardized services to all members of a population.(Kreitner, 263). Therefore, the overriding problem that the USPS faces is providing these standardized services to the population at large, but at the same time attempting to meet the population's diverse needs ( Kreitner, 263). The United States Postal Service is an open system, meaning that its success relies upon the surrounding environment (Kreitner, 55). The problems faced by the USPS are in many cases unique to that institution and therefore specific approaches have been designed to attempt to deal with them. The well being and well-established reputation of the United States Postal Service is currently being threatened by the emergence of new technologies. Many problem- solving techniques are being used in an attempt to help the USPS compete with emerging competition and return to its position as a vital component of American society. The Post Office Department, as it was first called, was established in 1782 as an executive department of the central government. In its early years, Congress tried to help by giving the Post Office a monopoly in the carrying of letters and was in charge of approving the budget and overseeing operations such as setting prices and mandating services (Campbell 194). This was not very productive "because of high postage rates, a depression, and an apparent scarcity of currency" (Adie 25). ...read more.

And the service is backed by the trust and reliability of the U.S. Postal Service(r)" ( usps.com). In this case the Postal Service is attempting to compete with other online companies while still offering the dependability of the "U.S Postal Service." The Postal Service is making attempts such as these to adjust to the changing environment and the emergence of the Internet. It is too soon to determine the effect that these changes will have on decreasing the debt, although it seems as if they are necessary to exist in the competitive environment that the Internet has created. In addition to sending and receiving of bills and letters through the Internet, an emerging trend among Americans is the purchasing of gifts, goods and supplies online. The shipping of these packages is for the most part handled by well-established competitors of the USPS such as FedEx and United Parcel Service. In response to this competition, the United States Postal Service has begun to push its priority mail service, which is similar to FedEx and United Parcel Service. The problems that the USPS must face are constantly increasing to the point where they can no longer be put off or ignored. In April of 2002, the United States Postal Service announced a Transformation Plan. The plan dictates that the Postal Service will operate more like a business, bringing the ability to negotiate volume discounts, contain costs, operate more efficiently and offer new services. One example of the United States Postal Service's espousal of this plan is the adoption of a new web address. The previous address of www.usps.gov. has been changed to www.usps.com. The switch to a "dot com" address adds more of a private business aura to the USPS rather than one supported by the government. The website offers a variety of online services through which the Postal Service is attempting to make itself a significant commercial online competitor. ...read more.

thwarted the prospect of legislative reform of the U.S. Postal Service (USPS) for at least the next two years" (Barbagallo 22). UPS was able to accomplish this because they hold the largest political action committee in America and when the Act came up, they lobbied against it. UPS feels that USPS is cutting in on their business and is "branching from its mission to deliver First class mail to every household" (Barbagallo 2). The United States Postal Service has been a vital part of American society since its establishment, however, recently its role has been threatened. The USPS is an organization that relies heavily on the ability to cope with and adjust to the changing environment. In order to help the USPS cope with the emerging technologies that are threatening its survival, the proper management approach must be taken. Since the USPS' largest problem is its debt, which has been brought about by its inability to meet the challenges posed by the internet and other factors, an operational approach to management may be useful in helping it regain its status. The Operational approach to management is dedicated to improving the efficiency of the organization, cutting waste and improving quality (Kreitner, 45). These are three major areas that the United States Postal Service must address in order to decrease debt. The United States Post Office has not taken a back seat position in the fight to maintain its esteem in the American society. The USPS has designed and implemented many different attempts to solve the problems that it faces and is currently working on other ways to overcome its obstacles. The aforementioned problems and possible solutions that the USPS has been involved in over the past two years since 2000 are just a portion of the plethora of problems and solutions that the organization has and will be faced with. If the USPS follows the correct and efficient management procedures and devotes time and effort to its cause, there is no doubt that the institution will soon regain its place as a prestigious and prosperous staple of the United States. ...read more.