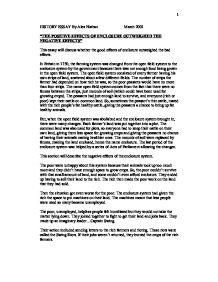 This essay will discuss whether the good effects of enclosure outweighed the bad effects.

HISTORY ESSAY By Alex Nathan March 2001 "THE POSITIVE EFFECTS OF ENCLOSURE OUTWEIGHED THE NEGATIVE EFFECTS" This essay will discuss whether the good effects of enclosure outweighed the bad effects. In Britain in 1750, the farming system was changed from the open field system to the enclosure system by the government because there was not enough food being grown in the open field system. The open field system consisted of every farmer having his own strips of land, scattered about a few different fields. The number of strips the farmer had depended on how rich he was, so the poor peasants would have no more than four strips. The name open field system comes from the fact that there were no fences between the strips, just mounds of soil (which could have been used for growing crops). The peasants had just enough land to survive, and everyone (rich or poor) kept their cattle on common land. ...read more.

So, the poor couldn't survive with that small amount of land, and some couldn't even afford enclosure. They ended up having to sell their land to the rich. The rich then made the poor work on the land that they had sold. Then the situation got even worse for the poor. The enclosure system had given the rich the space to put machines on their land. The machines meant that less people were need so many became unemployed. The poor, unemployed, helpless people felt humiliated but they would not take the matter lying down. They joined together to fight to get their land and jobs back. They made up an imaginary leader...Captain Swing. Their action included sending letters to the rich farmers and rioting. These riots were called the Swing Riots. If their jobs weren't returned, they burned the crops of the rich farmers. ...read more.

This crop growing system was called the Norfolk crop rotation. If the open field system had continued, the country would have been struck down with famine. More food was grown in the enclosure system because there was more space for machinery, making the farming process quicker. Also, because the animals were kept on the farmers' own land, selective breeding was possible. As fences went up, and enclosure was bought, crop disease was eliminated. If the fields had been open, diseases would have spread easily. Enclosure caught on quickly, with some other countries thought that enclosure was a good idea. In Italy, Germany and some Scandinavian countries, the enclosure system began to appear. In conclusion, it seems that, in the long term, the positive effects of enclosure outweighed the negative effects. The main reason being that without enclosure, 50 per cent of the growing population of Britain would have died of hunger. But more should have been done to help the poor farmers. So this essay agrees. "The positive effects of enclosure outweighed the negative effects." 1 ...read more.