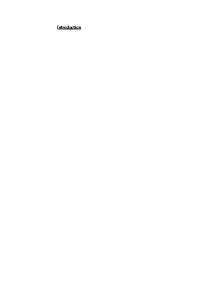 Two major drivers of greater globalization have been the decline in trade barriers and developments in new technology.

Introduction 1 Introduction 1.1 Introduction A fundamental shift is occurring in the world economy. National economies are moving away from being relatively isolated from each other by barriers to cross-border trade and investment; by distance, time zones, and culture. This shift is described as globalization (Solberg 1997). Two major drivers of greater globalization have been the decline in trade barriers and developments in new technology. The decline in trade barriers enable companies to view the world as their market, rather than just looking at their domestic market. Technological changes with advances in communications, transportation technology and most recently the emergence of the Internet and the World Wide Web, have rapidly lowered the costs of global communication. Both the decline in trade barriers and the developments in new technology contribute to making competition more international and increasing the amount of cross-border trade (Hill 2000). Internet and electronic commerce have been the subject of tremendous popular attention. Investors conviction of an economic revolution drove the valuation of Internet firms to the level of an Internet bubble. Normal metrics that governed investment such as business models and price-to-earnings ratios, can be said to have been ignored, and to get online became the major concern. As of 18th November 1999 the online portal Yahoo.com ($55 billion) was bigger than the four largest American airlines; United, American, USAir and Northwest (Devinney, Coltman, Midgley 2000). From march 2000 however, investors seem to have lost faith in online profits and Internet firms stock prices have since plummeted. The Internet bubble burst have had several casualties, including highly profiled clothing website Boo.com (The Economist 2001). Shapiro and Varian (1999) argue that while technology changes - economic laws do not. Internet firms with non-profitable business models have been forced to shut-down. According to webmergers.com a total of 135 companies in the US had shut down by December 2000. On the other hand, these where out of an estimated 7,000 to 10,000 private or public Internet firms (Businessweek 2000). ...read more.

Joint Ventures Joint Ventures refers to when a firm joins with one or more partners to establish a new business abroad. This mode of entry typically requires commitment of equity and/or other assets, including management talent and intellectual property. The Joint Venture enables partners to share technological, management and marketing know-how of each other. Strategic alliances Strategic alliances refer to cooperative agreements between companies. These alliances can include ingredients from among others licensing arrangements or joint ventures and can range from short term contractual agreements to formal joint ventures. The establishment of strategic alliances may facilitate entry into foreign markets. 2.4 A network approach to internationalization Collaboration in business is becoming common practice amongst firms, and these collaborations can range from informal relationships to more formal such as joint ventures (Chetty and Blankenburg Holm 2000). In order to study the internationalization of a firm, Madsen and Servais (1997) argue we need to understand the context in which it operates, such as environmental conditions and the company's relationships. One of the more recent approaches to internationalization is the network approach which is related to the research of Johanson and Mattson (1988). According to the network approach internationalization is seen as a process in which relationships are continuously established, developed, maintained and dissolved with the aim of achieving the objectives of the company. Relationships are developed through interaction in which the parties build mutual trust and knowledge. These relationships are connected by networks consisting of several companies including customers, customers customers, competitors, supplementary suppliers, suppliers, distributors, agents, and consultants as well as regulatory and other public agencies (Johanson and Vahlne 1990). It is assumed that without a good network in international markets the company will have problems with future growth. According to Johansson and Mattson (1988) the number and strength of the relationships in the network increases as the firm internationalizes. By internationalizing the firm creates and maintains relationships with counterparts in other countries. ...read more.

According to Hamill and Gregory (1997) setting up a website can, provide an attractive, low-cost method of sales promotion to global customers. Furthermore they argue that a good website may be used for advertising, corporate visibility, brand name recognition, public relations, press releases, corporate sponsorship, direct sales, customer support and technical assistance. Samiee Samiee (1998) states that firms, which have not been exporters, cannot expect to become exporters over night by virtue of developing and maintaining a website. He argues that developing an export-specific infrastructure is challenging and costly. International marketing also involves a wide range of considerations including meeting local product standards, target market pricing and competitive factors, legal and regulatory considerations etc. Furthermore he argues that a sustainable competitive advantage cannot be solely derived from access to the Internet or the development of a website. As an increasing number of firms acquire the necessary skills and technology to connect to the Internet, competitive advantage is acquired through the skillful and proprietary ways in which the technology is deployed (Samiee 1998). According to Samiee (1998) Internets applications include both being a vehicle enabling more efficient processes of conducting international business and a tool for promotion, information and communication. He suggests the use of the Internet may enable business processes, which are typically performed manually to be automated. Bidding, purchasing, inventory management, and order/shipment tracking are examples of processes that have the potential of being automated through the Internet in an international setting. The Internet can also be employed as a vehicle for revenue enhancement, for example, direct sales, promotion, and as a communications tool (Samiee 1998). According to Samiee (1998) regular or active exporting firms are best positioned to take advantage of the full potential of the Internet for revenue generating activities such as market research, promotional activities, and sales. To reap the benefits of these activities, he believes high commitment is needed in order to develop an Internet infrastructure including the staff to maintain the firm's multi-language sites for all of its intended target markets. Research Method - 12 - 28/04/2003 ...read more.