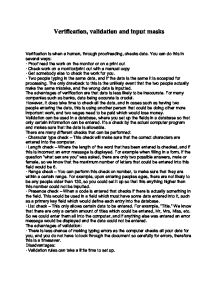 Verification, validation and input masks Verification is when a human, through proofreading, checks data. You can do this in several ways: � Proof read the work on the monitor or on a print out � Check work on a monitor/print out with a manual copy � Get somebody else to check the work for you. � Two people typing in the same data, and if the data is the same it is accepted for processing. The only drawback to this is the unlikely event that the two people actually make the same mistake, and the wrong data is inputted. The advantages of verification are that data is less likely to be inaccurate. For many companies such as banks, data being accurate is crucial. However, it does take time to check all the data, and in cases such as having two people entering the data, this is using another person that could be doing other more important work, and two wages need to be paid which would lose money. ...read more.

For example, upon entering peoples ages, there are not likely to be any people older than 130, so you could set it up so that this anything higher than this number could not be inputted. � Presence check - When a code is entered that checks if there is actually something in the field. This would be used in a field which must have some data entered into it, such as a primary key field which would define each entry into the database. � List check - This only allows certain data to be entered. For example, "Title." We know that there are only a certain amount of titles which could be entered, Mr, Mrs, Miss, etc. So we could enter them all into the computer, and if anything else was entered an error message would be displayed and the data could not be entered. The advantages of validation: � There is less chance of making typing errors as the computer checks all your data for you, and you do not have to look through the document so carefully for errors, therefore this is a timesaver. ...read more.

The disadvantages of input masks are: � When entering names, you could set it up so that the first letter of the 1st name, and the 1st letter of the surname are capitalised. However when it comes to names such as McHugh, the check would not allow the third letter of this name to be capitalised. � Like validation rules, they can take a considerable amount of time to set up; time that could be better spent doing other things. The following characters can be used to set up input masks. 0 - A number required 9 - A number optional L - Letter must be entered ? - A letter optional. > - A capital letter < - A lowercase letter If you wanted to set an input mask up for a postcode, you would do so in the following manner: An example of a postcode may be CW5 6JY. The input mask for this would be LL09 0LL The "Ls" for capital letters, and the 9 would be there since some postcodes do have an extra number on the end, but not all therefore the number would be optional. ...read more.

In summary, the report shows clear understanding of the three methods of inputting data into an Microsoft Access file. However more could be said, regrading the reason why a user would implement the methods. The report states how verification is ...

In summary, the report shows clear understanding of the three methods of inputting data into an Microsoft Access file. However more could be said, regrading the reason why a user would implement the methods. The report states how verification is undertaken, and the drawbacks to this approach. This section is quite good, as this shows the examiner that the work is detailed and this gives an accurate view of what 'Verification'. is. The report doesn't contain any screenshots, which would make the section 'Validation' more clear and this would enable the examiner to visualize the writing. On the flip side, the paragraph is well written, and detailed. If the student were to include a number of screenshots of Microsoft Access, this would re-enforce their background understanding of their written knowledge.

The three different paragraph are well explained and the student clearly understands how all three methods work. Although for high marks, the student could include real examples of their own database, and explain why it's necessary to include these. There is little information on why the user needs to implemented the three methods, which would allow the student to evaluate their background knowledge.

The presentation of the report is a block of text, which makes it quite difficult to read when going though the report. The report should contain line breaks, by splitting the report into three different sections. These would include 'Verification', 'Validation' and 'Input Masks'.