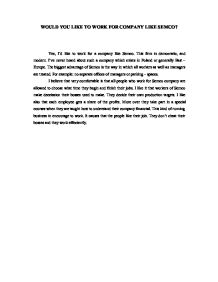 WHAT DO YOU GENERALLY LIKE DOING AT THE WEEKENDS?

WOULD YOU LIKE TO WORK FOR COMPANY LIKE SEMCO? Yes, I'd like to work for a company like Semco. This firm is democratic, and modern. I've never heard about such a company which exists in Poland or generally East - Europe. The biggest advantage of Semco is the way in which all workers as well as managers are treated. For example: no separate offices of managers or parking - spaces. I believe that very comfortable is that all people who work for Semco company are allowed to choose what time they begin and finish their jobs. I like it that workers of Semco make deceission their bosses used to make. They decide their own production targets. I like also that each employee gets a share of the profits. More over they take part in a special courses when they are taught how to understand their company financial. This kind of running business in encourage to work. It causes that the people like their job. They don't cheat their bosses and they work effeciently. ADVANTAGES AND DISADVANTAGES OF LIVING AND WORKING IN A BIG CITY The charms of live in small or large locality can be different. In my opinion it depends on way of approach to life. In young age life in larger city lets more possibilities of development for example we can choose better high school or else as well as we have wider choice of major of studies. In larger city we have to deal with quicker technical development. There exist larger possibility of finding work (more institution of employment, schools, offices and so on). Culture and sport is more developed in big city (cinema, theatres, operas, exibitions, sport clubs, more sport facilities and so on), and also larger possibility of development of ourselves interests (youth culture and educational centries and so on). If somebody dislikes cultures he can go to pubs or disoes, there are many of them, where he can meet with his friends. ...read more.

I work for ESPRIT. It's a subsidiary of Ultimate Fashion Ltd. in Poland. Ultimate Fashion Ltd belongs to EMPIK Media and Fashion. It is operator of famous consumers brands. It includes such shops as EMPIK, SMYK, ZARA, WALLIS, RIVER ISLAND, MEXX, GALERIA CENTRUM and SEPHORA. ESPRIT sells clothes and accessories for everyone: women and man as well as children. This ESPRIT is located in Court Wola in Warsaw. My job involves a lot of patience and persistence. I also have to be tolerant. I'm responsible for helping people, arrangeing clothes and dusting. What I like most about my job is that I can meet new people and get to know new fashion trends. And that's all what I can tell. DESCRIBE YOUR IDEAL JOB When I was a boy as every day I was dreaming that I become a engine driver (mszynista) or a policeman. I was playing with other boys the game in which we were pretending police and thieves. It was a lot of fun... Then we started to grow up and change. We have changed a lot. Also we can't forget that world and our country has changed, too. Everybody found out that there is so many different jobs we haven't had any idea about. Increasing of technic is so fast that it's so difficult to imagine and notice the changes. As a result of that a lot of new proffesions arise. So my ideal job has been changing many times. I've started to dream about working with computers for some time now. On the beginning I wasn't sue what exactly I want to do. There's so many interesting jobs in this domain that it's very difficult to decide which one is the best. During my studying computers at "PROFESJA" College it became more clear. And now I know that I"d like to be a network manager. This ise very responsible work, because working of all company's computers will be depending on me. ...read more.

The best company perks which may encourage to work better are perfomance - related bonus and possibility of promotion. Some people work only for it. Another company perks which may encourage to work better and more effeciently are for example: company car, vouchers for lunch, kino, sports facilities and so on. In my opinion company perks cause the workers feel well and more valuable so they work better and better and more and more effeciently. IS JAPAN ONE OF THE BEST DEVELOP COUNTRIES IN THE WORLD? WHY? I think that Japan is one of the best develop countries in the world. Japane's employeers are the most profitable in the whole world. There is big development of advanced technology which working in condition of the mass media and very developed of transport. Car, electric and electronic industry is also very developed. In those industires are used the newiest technology of production. A lot of things which are produced in Japan we can buy in the whole world. The feature of Japane's industry is that Japan concentrates its most imprtant inustries' centries along coast and round of the biggest cities. WORKING FOR A BIG INTERNATIONAL COMPANIES. PROS AND COUS. I think that working for a big international companies has both advantages and disadvantages. The biggest advanatges of it is greater possibility of development and promotion. There are a lot of positions where we can be promoted. We aslo can meet new people from the whole world. In the international company is also greater possibility of going to business trips. I think that the international company is stable and it is small possibility of bankrupt. In big international companies are also more company perks, for example: company car, private health insurance, vouchers for lunch, holidays and so on. In my opionion workinf for a big international companies has also disadvatages. Workers have more work to do and they larger competition because a lot of people would like to get their position. So employeers must work better and more effeciently. In my opinion working for a big international companies is more stressful. ...read more.