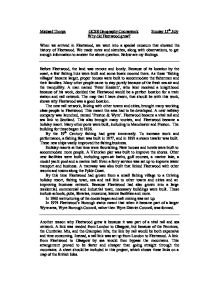 Why did Fleetwood grow?

Michael Thorpe GCSE Geography Coursework Sunday 15th July Why did Fleetwood grow? When we arrived in Fleetwood, we went into a special museum that showed the history of Fleetwood. We made notes and sketches, along with observations, to get enough information to answer the above question. Below are my findings. Before Fleetwood, the land was remote and lonely. Because of its location by the coast, a few fishing huts were built and some boats moored there. As these 'fishing villages' became larger, proper houses were built to accommodate the fishermen and their families. Many other people came to stay purely because of the fresh sea air and the tranquillity. ...read more.

Fleetwood became a vital rail and sea link to Scotland. This also brought many tourists, and Fleetwood became a holiday resort. Many other ports were built, including to Manchester and Preston. The building for these began in 1836. By the 19th Century fishing had grew immensely. To increase work and performance, a fishing fleet was built in 1877, and in 1891 a steam trawler was built. These new ships vastly improved the fishing business. Holiday resorts at that time were flourishing. New houses and hotels were built to accommodate more people. A Victorian pier was built to improve the shores. Other new facilities were built, including open-air baths, golf courses, a marine lake, a model yacht pool and a marine hall. ...read more.

In 1963 restructuring of the docks began and salt mining was set up. In 1974 Fleetwood's Borough status meant that when it became part of a larger Wyre area, Wyre Borough Council, rather then Wyre District Council, was formed. Another reason why Fleetwood grew is because it was part of a vital rail and sea network. A link was needed from London to Glasgow, but because of the Pennines, the Cumbrian Mts, and the Grampian Mts, the link by rail would be both expensive and time consuming. Instead, a rail link was set up from London to Fleetwood. A link from Fleetwood to Glasgow by sea would then bypass the mountains. This arrangement proved to be faster and cheaper than going straight through the mountains. A sheet should be included in this project, which shows these links on a map of the British Isles. ...read more.