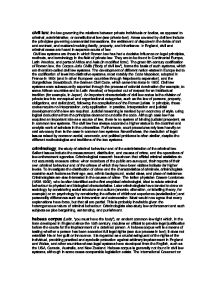 civil law, the law governing the relations between private individuals or bodies, as opposed to criminal, administrative, or constitutional law (see private law). Areas covered by civil law include the principles governing commercial transactions, the settlement of disputes in the fields of tort and contract, and matters involving family, property, and inheritance. In England, civil and criminal cases are heard in separate courts of law. Civil law systems are those in which Roman law has had a decisive influence on legal principles, methods, and terminology in the field of private law. They are to be found in Continental Europe, Latin America, and parts of Africa and Asia (in modified form). The great 6th-century codification of Roman law, the Corpus Juris Civilis ('Body of civil law'), forms the basis of such systems, which are therefore called civil law systems. The development of different nation-states in Europe led to the codification of laws into distinctive systems, most notably the Code Napoleon, adopted in France in 1804 (and in other European countries through Napoleonic expansion), and the Burgerliches Gesetzbuch, the German Civil Code, which came into force in 1900. Civil law systems were subsequently exported through the process of colonial domination (for example, to some African countries and to Latin America) or imported out of respect for an intellectual tradition (for example, in Japan). An important characteristic of civil law codes is the division of private law into conceptual and organizational categories, such as the law of persons, property, obligations, and delict (tort), following the compilations of the Roman jurists. In principle, these codes require no interpretation, only application. In practice, interpretation and judicial development of the law are required. Judicial reasoning is marked by an economy of style, using logical deductions from the principles deemed to underlie the code. Although case law has acquired an important role as a source of law, there is no system of binding judicial precedent, as in common law systems. ...read more.

mutiny, an open revolt against authority; for example of prisoners against a prison governor, or sailors on a commercial vessel against the captain. It is also one of the gravest offences against military law, committed by any member of the forces who combines with one or more others (who may be civilians) to resist or usurp the lawful military authority, avoid operations against an enemy, or go over to the enemy. Military personnel accused of mutiny are proceeded against in courts martial, while civilians are dealt with under ordinary criminal law. assassination, the murder of a prominent figure, usually for political or religious reasons. Leaders have been assassinated by lone individuals; as part of a political or religious opposition movement; in the process of a coup d'etat, rebellion, or revolution; or by covert action conducted by the government of another state. Perhaps the two most notorious assassinations in the 20th century were those of Francis Ferdinand, Archduke of Austria, in 1914, which was an immediate cause of World War I, and US President Kennedy in 1963. There were unsuccessful assassination attempts against US President Reagan and Pope John Paul II in 1981, and against UK Prime Minister Margaret Thatcher in 1984. Other assassinations in the post-1945 world include those of President Sadat of Egypt in 1981; Prime Ministers Indira and Rajiv Gandhi of India, who were assassinated in 1984 and 1991; and Yitzhak Rabin, Prime Minister of Israel, in 1995. terrorism, the practice of using violent and intimidating acts, especially for political ends. State terrorism implies either the use of terror by state authorities in order to suppress opposition, or state sponsorship of terrorist activities. Terrorism is also used by political groups in order to bring pressure to bear on state authorities to accede to political demands. Terrorism has been used most commonly by revolutionary groups whose objective is the overthrow of a particular state authority, and by nationalist groups seeking national self-determination. ...read more.

Other violent crimes are robbery (the use of force in the commission of a theft, as in the case of mugging); domestic violence, and homicide. Many sexual offences, such as indecent assault and rape, involve violence. Violent crimes are of particular concern to the public; they are often associated with drunkenness, drug dependency, the availability of weapons, frustration, and hopelessness. Some propose stiffer sentencing as a deterrent, while others advocate prevention (for example, education programmes) or protective measures (such as personal alarms, or protective screens for counter staff). In some countries there are support and compensation schemes for the victims of violent crime, who often suffer shock and lasting psychological distress in addition to their physical injuries. computer crime, a crime in which a computer is either a tool of crime or is the object of crime. Using a computer as a tool of crime often involves altering, deleting, or adding to data stored on it. Computer crime is growing because valuable data are stored on computers and it is impossible to maintain absolute security around a computer system, particularly a large one with many users. Electronic banking systems are the commonest target, and industrial espionage involving computers is also becoming a serious threat. Using the 'salami technique', for example, the criminal may illegitimately and regularly transfer funds from many bank accounts but in such small amounts that those defrauded do not notice. Industrial espionage cases often involve illegal access to computer files or networks to obtain confidential information. A computer is the object of crime when it is sabotaged through the planting of computer 'viruses'--for instance, viruses may hold the threat of destroying the databases of large organizations unless money is paid. Viruses are designed to replicate themselves and may lie dormant and undetected within computer systems for some time, and can be passed from system to system without the knowledge of the users. The increase in the use of computers has resulted in legislation against computer crime in many countries, but detecting and proving offences is difficult and many organizations are unwilling publicly to admit that they are victims. ...read more.