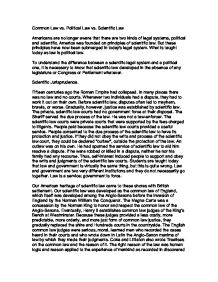 Common Law vs. Political Law vs. Scientific LawAmericans are no longer aware that there are two kinds of legal systems, political and scientific.

were so many books as those on law exported to the colonies." A British general trying to govern America in the 1700s complained that Americans were impossible to buffalo; they were all lawyers. These were the people who gave the world the great American Declaration of Independence. Political Law Political law is the opposite of common law. Based on political power -- brute force -- not on the two fundamental maxims. It is crude and primitive. It has no requirement for logic or morality. It changes whenever the political wind changes. Fickle and tangled; no one can completely understand it. Political law is also known as feudal or civil law. Democracy or dictatorship, it doesn't matter; political law is arbitrary. You do whatever the power holders say, or else. Right or wrong, it commands obedience. This is why majority rule is mob rule. The majority is as ill a ruler as any dictator. Like the dictator, they do not necessarily vote for what is right; they vote for what they want. Their wants change constantly, so political power destroys a man's ability to plan ahead. James Madison asked in the `Federalist Papers', "What prudent merchant will hazard his fortunes in any new branch of commerce when he knows not that his plans may be rendered unlawful before they can be executed?" ...read more.

Says Arthur R. Hogue in `Origins of the Common Law', "The common law is marked by a doctrine of the supremacy of law ... All agencies of government must act upon established principles ... The king, like his subjects, was under the law." Government control of the education of the young, of the school system, causes a "chilling" effect on teaching what we and our families need to know about our heritage of scientific law in order to preserve freedom. Teachers and textbook publishers fear to mention anything that the bureaucrats who control budgets and hiring and firing might disfavor. Any serious criticism of government is omitted from the student's lessons. Vital knowledge about law, our heritage, and the history of the struggle for liberty and justice are not passed on to the next generation. Our Common House is in a shambles. The roof leaks and the foundations are rotting. We have no choice. It is our fate that we must interrupt our pleasures and private pursuits and join with others to study the common law to learn how to restore the House. Otherwise, a cold, cold wind will soon blow in on us and we shall be more unsheltered beneath every political storm that arises than we already are until finally we shall live in misery in a complete ruin. ...read more.