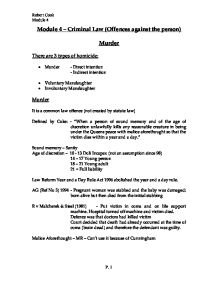 Module 4 - Criminal Law (Offences against the person) Murder There are 3 types of homicide: * Murder - Direct intention - Indirect intention * Voluntary Manslaughter * Involuntary Manslaughter Murder It is a common law offence (not created by statute law) Defined by Coke: - "When a person of sound memory and of the age of discretion unlawfully kills any reasonable creature in being under the Queens peace with malice aforethought so that the victim dies within a year and a day." Sound memory - Sanity Age of discretion - 10 - 13 Doli Incapax (not an assumption since 98) 14 - 17 Young person 18 - 21 Young adult 21 + Full liability Law Reform Year and a Day Rule Act 1996 abolished the year and a day rule. AG (Ref No 3) 1994 - Pregnant woman was stabbed and the baby was damaged; born alive but then died from the initial stabbing R v Malcherek & Steel (1981) - Put victim in coma and on life support machine. Hospital turned off machine and victim died. Defence was that doctors had killed victim Court decided that death had already occurred at the time of coma (brain dead) and therefore the defendant was guilty. Malice Aforethought - MR - Can't use it because of Cunningham Murder is a result crime. AR = Death MR = Intention (Direct/Oblique intention to kill or cause GBH) R v Smith (1961) - Armed robbery. Police officer jumps on bonnet of car, gets thrown off and dies. Re interpreted law because murder is common law and included GBH as a MR. (basically transfer max to mandatory life) S20 GBH turns into manslaughter Intention to kill = Judge is told to overdo the direction towards the jury Oblique intention = The intention is to do harm to the victim but not to kill them Smith & Hogan gave an example of oblique intention: - "A bomb is put on a plane, timed to explode over the mid Atlantic, 1. ...read more.

In R v Litchfield (1998) the appeal court defined gross negligence in subjective terms In R v Singh (1999) the courts said the best way to deal with gross negligence is objectively. In R v Lidar (1999) a short while after Singh the courts said that the best way to deal with gross negligence in subjective or objective terms Conclusions of Gross Recklessness and Gross Negligence 1. UAIM is affected by Adomako although this type of manslaughter is unpopular with the legal profession because: - * It requires a very low level of MR * It may / may not cover unlawful omissions 2. The future of GRIM is unclear. In the case of Adomako, Lord Mackay concluded that GNIM should replace GRIM. However, some observers suggest that GRIM could still exist in the form of subjective recklessness. This was the basis of the case of Khan & Khan (1998). They were found guilty of subjective recklessness but on appeal the COA concluded there was no such offence and ordered a retrial. 3. The current state of GNIM is still uncertain, at the present time it appears to be both subjective and objective. 4. The whole issue if involuntary manslaughter is currently being reconsidered by the Home Office, they suggest 5 new definitions if IM would be introduced by statute: - * Reckless killing --> GR * Killing by gross carelessness --> GN * Killing with the intention to injure --> UA * Corporate killing --> ? * Substantial contribution to corporate killing --> ? Non-Fatal offences 1. Common Assault 2. Common Battery (1 & 2 are separate charges but can have both together) 3. OAPA 1861 s47 ABH 4. OAPA 1861 s20 GBH (1, 2, and 3 are linked) 5. OAPA 1861 s18 GBH Common Assault & Battery Common = Common law offence (non statutory offences. Case law not statute offence) These common law offences have been developed by the courts and not by Parliament. ...read more.

He wrongly concluded that he didn't have to give a specimen and was charged with failure to give a specimen. He said it was a mistake - he didn't know he had to give one Guilty - ignorance to the law is not a defence Honest & reasonable mistake R v Morgan (1972) - Wanted to get revenge on wife who he believed was having an affair. He recruited men in the pub to rape his wife saying it sex play and she likes it to be very realistic They rape her. Mistake but convicted of rape Appealed based on Tolson (Honest and reasonable) 'Honest' is subjectively tested 'Reasonable' is objectively tested Convicted of rape which is intention or recklessness Honest mistake was all that was required as they had no intention and recklessness is subjectively tested. On appeal Morgan argued that recklessness in rape cases was subjective and therefore mistake needed to be honest but not reasonable The COA agreed with this but concluded that if the jury had been given this fact they would have still found him guilty Conviction was upheld B (a minor) v DPP (2000) - Same argument was raised and same outcome was reached Conclusion to mistake When a defendant pleas mistake the type of mistake and the judge's direction depends on the particular offence * Offences of subjective recklessness Rape Common Assault and Battery S47 ABH S20 GBH In these cases the mistake only needs to be honest. It does not need to be reasonable. The judge must direct that the jury y must accept the mistake if the defendant subjectively believed the circumstances even if his actions were totally unreasonable * Offences of objective recklessness This is based on the Caldwell direction: - 1. The defendant saw the risk and took it anyway 2. The defendant failed to see the risk even though the risk was obvious Therefore under the Criminal Damage Act 1971 a person pleading the defence of mistake would have to convince the jury that they made an 'honest' and 'reasonable' mistake Robert Cook Module 4 P. 1 ...read more.