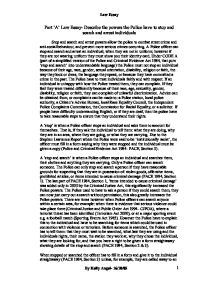 Part 'A' Law Essay- Describe the powers the Police have to stop and search and arrest individuals Stop and search and arrest powers allow the police to combat street crime and anti-social behaviour, and prevent more serious crimes occurring. A Police officer can stop and search and arrest an individual, when they are not in uniform; however if they are not wearing uniform they must show you their identity card. Under CODE A (part of a simplified version of the Police and Criminal Evidence Act 1984, that puts 'stop and search' into understandable language) the Police must not stop an individual because of their age, race, gender, sexual orientation, disability, religion or faith, the way they look or dress, the language they speak, or because they have committed a crime in the past. The Police have to treat individuals fairly and with respect. If an individual is unhappy with how the Police treated them, they can complain. If they feel they were treated differently because of their race, age, sexuality, gender, disability, religion or faith, they can complain of unlawful discrimination. Advice can be obtained from, or complaints can be made to: a Police station, local police authority, a Citizen's Advice Bureau, local Race Equality Council, the Independent Police Complaints Commission, the Commission for Racial Equality, or a solicitor. ...read more.

a football match (Sporting Events Act 1985). However the Police have to explain this to the individual and have to be searching for items which could be used in connection with violence or terrorism. Before someone is searched, the Police officer has to tell them: that they must wait to be searched, what law they are using and the individuals rights, their name, the station they work at, why they chose the individual, what they are looking for, and that you have a right to be given a form straightaway showing details of the stop and search (PACE 1984, Section 2 & 3). When stopped or searched the officer has to fill in a form and give it to the individual straightaway (PACE 1984, Section 3) unless, for example, they are called away to an emergency. In this case a copy can be obtained from a Police station anytime within 12 months. The officer must write down: the name or a description of the individual (only if they are searched); their self-defined ethnic background, when and where they were stopped or searched, why they were stopped or searched, if they are taking any action, the names and/or numbers of the officers, and if the individual was searched- what they were looking for and anything they found. ...read more.

An arrestable offence is any offence where the sentence is fixed, the sentence is 5 years or more, or any offence which Parliament says is an arrestable offence. The Police can arrest individuals for any other offence (non-arrestable) if: the suspects name cannot be discovered, there are 'reasonable grounds' for suspecting that the name and address are false, or if it is necessary to protect that person from physical injury, damage to property, obstructing the highway, or to protect a child, elderly or vulnerable person (PACE 1984, Section 25). They can also arrest someone due to failure of a bail condition (PACE 1984, Section 46a), or for collective and aggravated trespass, breach of the peace, and with a warrant from the Magistrates Court (CJPOA 1994). Police have to give the reason why the suspect is being arrested (PACE 1984, Section 28), and they have to treat the suspect humanely and with respect. The Police can use 'reasonable force' to arrest an individual (PACE 1984, Section 117), and must ensure that the suspect is taken to the police station as soon as possible (PACE 1984, Section 30). If the Police act in a way which does not comply with the law or the codes of practice, an individual has the right to complain and can attempt to sue the police. ?? ?? ?? ?? Law Essay 1 By Kelly Angel- 16/10/05 ...read more.

This is a generally accurate answer which contains accurate description and relevant statutory authority showing where the police powers come from. It could be improved by re-ordering and linking some of the paragraphs as indicated in the comments.
Rating ****