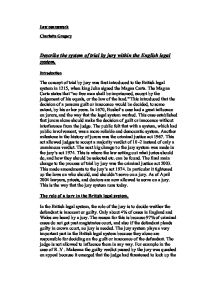 Describe the system of trial by jury within the English legal system.

Law coursework Charlotte Gregory Describe the system of trial by jury within the English legal system. Introduction The concept of trial by jury was first introduced to the British legal system in 1215, when king John signed the Magna Carta. The Magna Carta states that "no free man shall be imprisoned, except by the judgement of his equals, or the law of the land." This introduced that the decision of a persons guilt or innocence would be decided, to some extent, by his or her peers. In 1670, Bushel's case had a great influence on jurors, and the way that the legal system worked. This case established that jurors alone should make the decision of guilt or innocence without interference from the judge. The public felt that with a system, which had public involvement, was a more reliable and democratic system. Another milestone in the history of jurors was the criminal justice act 1967. This act allowed judges to accept a majority verdict of 10-2 instead of only a unanimous verdict. The next big change to the jury system was made in the jury's act 1974. This is where the law setting out what juries should do, and how they should be selected etc. can be found. The final main change to the process of trial by jury was the criminal justice act 2003. This made amendments to the jury's act 1974. In particular it tightened up the laws on who should, and shouldn't serve on a jury. As of April 2004 lawyers, priests, and doctors are now allowed to serve on a jury. This is the way that the jury system runs today. The role of a jury in the British legal system. In the British legal system, the role of the jury is to decide weither the defendant is innocent or guilty. Only about 4% of cases in England and Wales are heard by a jury. ...read more.

There are sometimes two ushers; the jury' usher, and the witness's usher. They guide the jury and witnesses into and out of the court, and administer oaths. A defence representative is the legal representative for the defendant and helps the defence advocate present their evidence. They will take notes as the evidence is given in case the defence needs to refer back to some things they have said later on in the case. The logger records the proceedings, either on tape, or using a modified word processor called a stenograph. The public gallery is an area of the court that is open to the public, if they want to sit in the trial. Members of the press may be in the trial. No jury member is allowed to speak to press. Jury members are sat in a bench of 12 on the trial to give their opinions, hear the evidence and arguments from both the prosecution and the defence representatives, and then make a final decision on weather they think the defendant is guilty or innocent. The jury room. The jury room is where all 12 members of the jury go to discuss the evidence presented in the trial, and then decide on a verdict. The jury must elect a spokesperson to stand up and present their verdict to the court; this person is called the foreman of the jury. Whilst the jurors are in the jury room they are to have no contact with anyone outside the jury room except for giving a note to the usher. The jury are given plenty of time to discuss the evidence and reach their verdict, but in some cases the jury don't always agree. In this case the judge will accept a majority verdict. If the jury cannot reach a verdict, then there is a complete retrial with a new jury. The verdict. When the jury have reached a verdict, the jury will return to the courtroom. ...read more.

The main disadvantage of using this method is there would not be as a wider cross section of society, so less opinions would be heard, and therefore the verdict will not be as fair as it could be. The last alternative to trial by jury is trial by judge and a mini jury of six or seven jurors. The advantages of using this method are; it saves some cost because less expenses have to be paid, it maintains the local knowledge because there are still people from the society having an input in the trial, and finally this method would be more likely to maintain the public's faith in the system because there is still some involvement of ordinary working class people. Although a big disadvantage of using this method is that most of the present problems with a jury would still remain. Conclusion. I think that the current system that we have is a good one, for the simple reason in my opinion, public involvement in the system is a very important factor to consider, if the public wasn't involved in the legal system then there would be no public faith in the legal system, and that will result in a lot of problems. Also trials wouldn't be completely fair, because judges are said to be more prosecution minded, and biased, so the defendant wouldn't get a fair verdict. I understand that there are problems with the current system, but they are problems that in my opinion can be resolved. For example I think that the fact that anyone from the age of 18-70 can serve is a problem, because the people that are randomly selected could have problems, for example they could be illiterate, and would therefore not understand the case fully, so their contribution to the case, and their verdict would not be completely reliable. To resolve this issue I personally think that a basic mathematics and literacy test should be put in place to see weather the jury member would be able to serve, and if their contribution to the case would be completely necessary. ...read more.