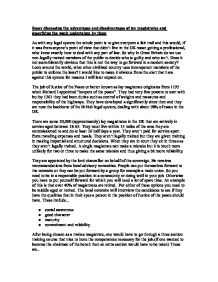 essay discussing the advantages and disadvanteges of lay magistrates

Essay discussing the advantages and disadvantages of lay magistrates and describing the work undertaken by them As with any legal system the whole point is to give everyone a fair trail and this would, if it was from anyone's point of view that didn't live in the UK mean getting a professional, who knew exactly how to deal with any part of law. So why In Great Britain do we use non-legally trained members of the public to decide who is guilty and who isn't. Does it not seem blatantly obvious that this is not the way to go forward in a modern society? Look around the world, what other civilized country uses incompetent members of the public to enforce the laws? I would like to make it obvious from the start that I am against this system for reasons I will later expand on. The job of Justice of the Peace or better known as lay magistrate originates from 1195 when Richard I appointed "keepers of the peace". They had very few powers to start with but by 1361 they had been duties such as control of weights and measures and responsibility of the highways. ...read more.

They do this by referring to the clerk, who can give information on the laws but aren't allow cannot give advice on how they should deal with the case. As magistrates aren't legally trained they have limited powers compared to that of a judge. The fine limit is �5000 and they can only sentence up to a 6 month jail term. When you take a glance at almost all of the cases they deal with this is perfectly adequate, but this means that if they are dealing with a case that involves anything above their power then they have to hand it up to a higher court. The backbone of a good legal system is the understanding of law by the people it covers, and thus can only be achieved if the system is either very simple or they are involved in the making and implementing of the laws. Now in Great Britain the laws certainly aren't simple but neither are they in any country and it would be amazingly hard to simplify the law so as everyone can understand it so that should be out of the picture. ...read more.

There is also the issue with the speed of it. There is always the complaint of how long legal cases take so people saying that the magistrates court is faster to many would sound like a great idea. But yet again I must point out that the time it takes is of the greatest of importance but for the fairness of the out come. When I look at this point the phrase "slow and steady wins the race" comes to mind, and I think this is a very applicable idea in much of the legal system. Overall I think that the idea of using members of the public to decide court cases is a totally unreliable method which really shouldn't be the main part of the legal system in england. I can see where the idea came from and it is well intended but it is just useless in a modern legal system due to the complex laws and bylaws. To put it simply magistrates are... * miss represented in court * middle aged * middle class * biased * pro sentencing * unreliable So really not great really. So would you like to be tried by unreliable middle class magistrates or a professional jury? ...read more.