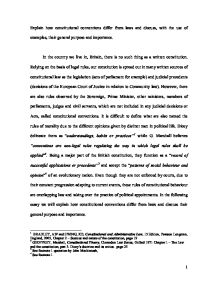 Explain how constitutional conventions differ from laws and discuss, with the use of examples, their general purpose and impor

Explain how constitutional conventions differ from laws and discuss, with the use of examples, their general purpose and importance. In the country we live in, Britain, there is no such thing as a written constitution. Relying on the basis of legal rules, our constitution is spread out in many written sources of constitutional law as the legislation (acts of parliament for example) and judicial precedents (decisions of the European Court of Justice in relation to Community law). However, there are also rules observed by the Sovereign, Prime Minister, other ministers, members of parliaments, judges and civil servants, which are not included in any judicial decisions or Acts, called constitutional conventions. It is difficult to define what are also named the rules of morality due to the different opinions given by distinct men in political life. Dicey delineate them as "understandings, habits or practices"1 while G. Marshall believes "conventions are non-legal rules regulating the way in which legal rules shall be applied"2. Being a major part of the British constitution, they function as a "record of successful applications or precedents"3 and accept the "patterns of social behaviour and opinion"4 of an evolutionary nation. ...read more.

There are different opinions about which is conventions' purpose. John Mackintosh believes its general purpose is to regulate how legal policies should be applied. These rules of morality are a part of the constitution in order to; unlike the strict and specific laws, control the practical appointments of the judicial system and the government. For example, under conventions the Queen must agree to bills that have been approved from the House of Lords and the House of Commons. Nevertheless, according to Dicey, their purpose is to make sure that the powers, which are legally managed by the crown, are exercised by ministers in concurrence to "the principles of responsibility and representative government"16. To support Dicey's opinion we can adopt the example given above, and how the ministers of the parliament take over the work and hand it in for the Queen to sign it under the convention. However, in my opinion, rules of behaviour have a much broader use than what Dicey suggests because not all conventions lay on the crown's powers. For instance, conventions regulate relationships with very diverse government persons and institutions such as, the Cabinet and the Prime Minister; the Government and the Parliament; the two Houses of Parliament, the United Kingdom and the Commonwealth countries among others. ...read more.